A Mystery in Lace 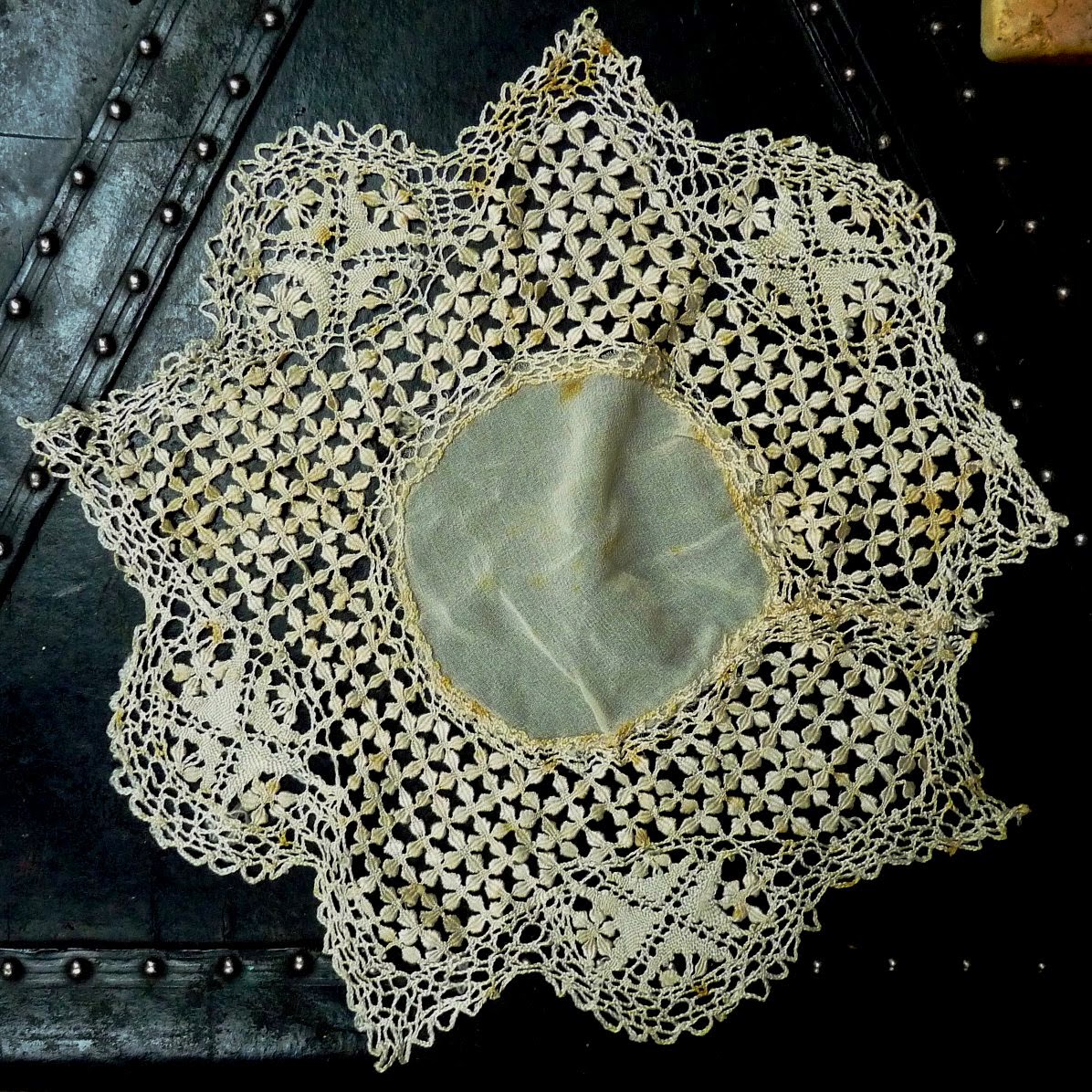 Dear Sarah Fincham of Small Offerings sent me a beautiful drawing in a trade for linen pajamas. As a surprise, she included this piece of silk lace that she had found in a flea market. She said that perhaps it was meant to be a doily or jar cover, but I suspected she knew better, and had sent me this little beauty as a test of my textile detective skills. (She knows I love mysteries.)

After marveling at its fragility and identifying the dry, somewhat crunchy texture as a sign of real silk, I gave it a long look. Something was off. See the outer edge, alternating points and rounds? But check out the far right. There are two points together, with a rather crude seam in between. Aha! The piece of lace had been re-purposed from its original use. Due to the small circumference of the centre round my first guess that it was a cuff. 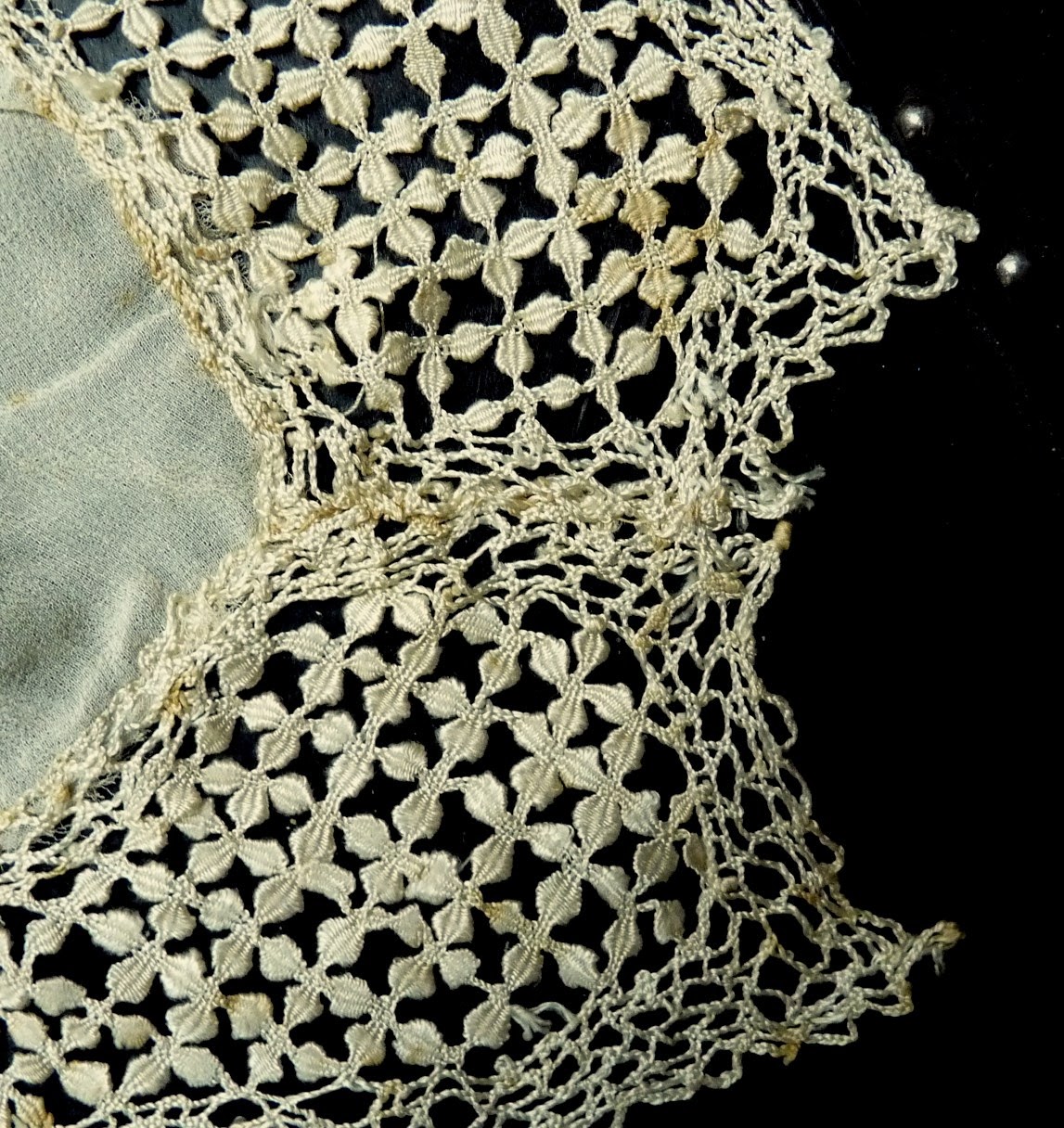 Very, very carefully I removed the silk thread that attached the lace to the centre bit of chiffon, and unpicked the seam. Freed from the chiffon, the lace relaxed, and I could see it was in fact a collar, maybe for a child or a lady with a very slender neck. 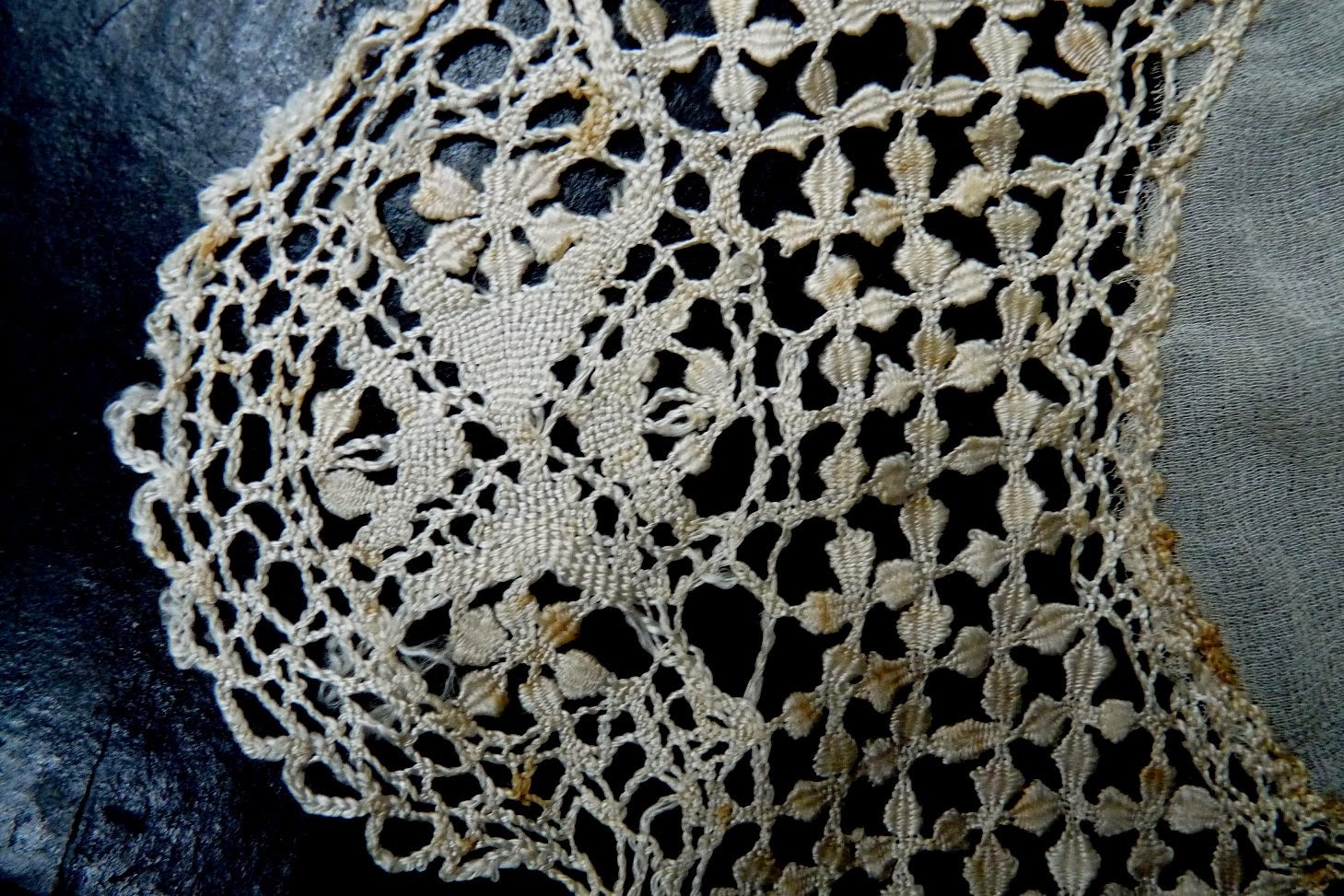 Since the lace had several dark spots on it, I thought I should give it a bath. A soak in a bit of cool water and a drop of  dish soap, then a rinse and another short soak in diluted lemon juice. Several rinses later, I rolled it in a towel to remove excess water, then carefully laid it flat to dry, coaxing the picot edge into position with my fingertips. 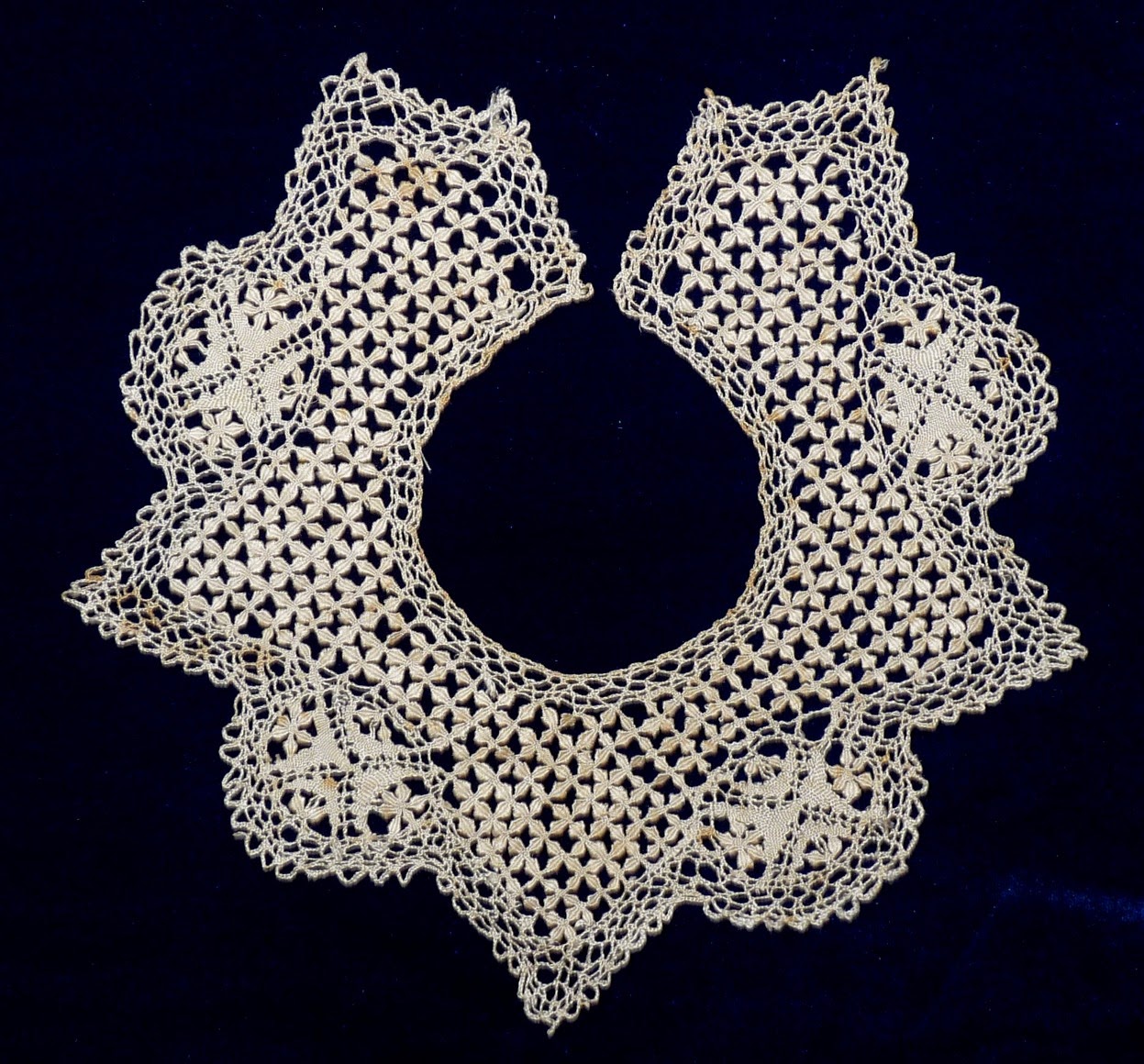 While it dried, I Googled, and quickly identified the lace as Maltese bobbin lace, probably from the 19th C. Here's another example: 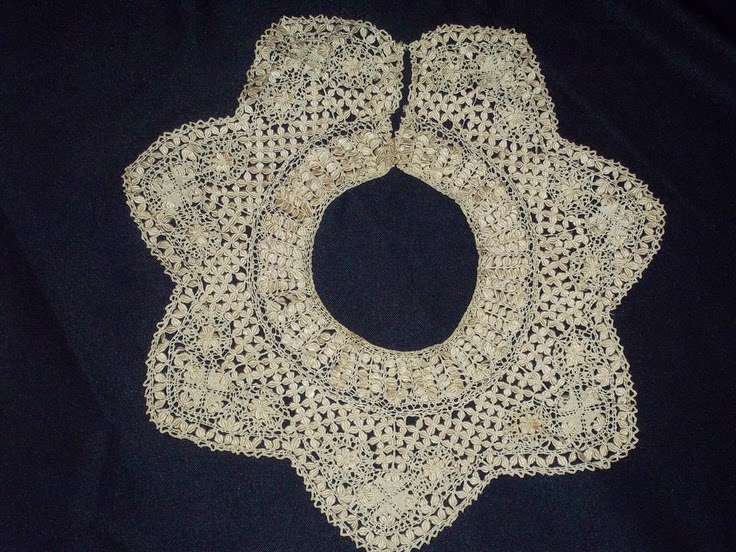 It is interesting that traditional Maltese lace had almost died out until an Englishwoman, Lady Hamilton Chichester, was responsible for reviving the craft, and Maltese lacework became quite popular in England after being exhibited in the Great Exhibition of 1851. Which explains how it eventually turned up in an English flea market. Why someone decided to re-model it in the interim remains a secret - even if no longer a fashionable collar, as a doily it wouldn't lay flat, and as a jar cover it would be too precious for raspberry jam. I think I will frame it, and hang it alongside Sarah's drawing.

Oh, yes, that drawing! I bet you want to see it. Here it is, as yet unframed. Wonderful, huh? For more of Sarah's work, check out her Etsy shop. 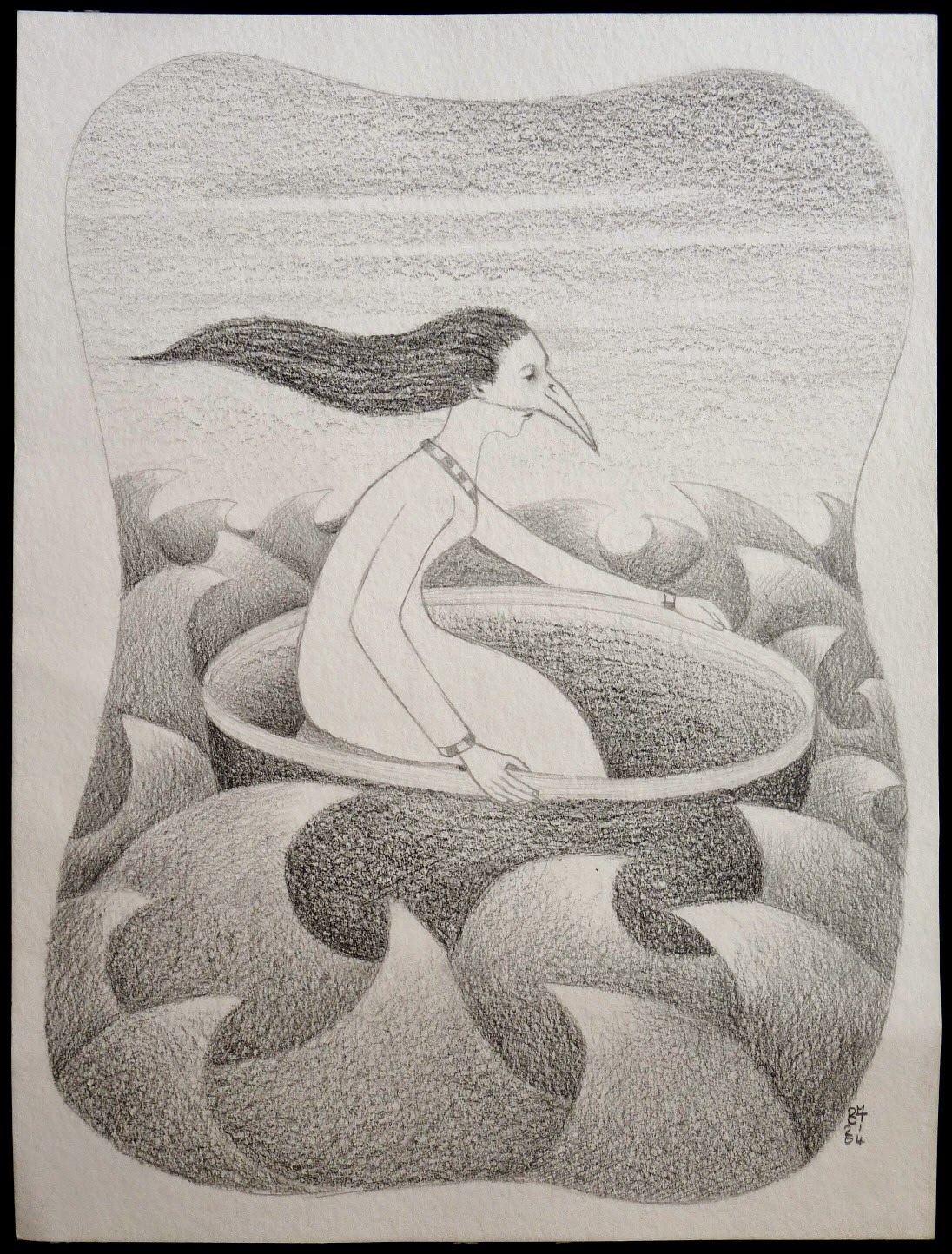 And an update on our Vicky - she is still in hospital and hasn't yet been given an idea of when she may be released. The possibility of infection is still a big concern, but she has been making steady progress and has even been taking a few steps unassisted. The outpouring of love and support for her has made a huge difference, she says - so thank you!
art textile history Vintage cloth