Round the World Blog Hop

on November 21, 2014
Thanks to Arlee Barr for inviting me on this journey.

Q.    What am I working on?
A.     I'm finally back to the Codex Canadensis series, after a few months of dabbling with other stuff.

Here is what I wrote as I was just beginning this project, over three years ago now.

The Codex Canadensis is a 17th C. document most likely created by Louis Nicolas, a French Jesuit missionary who also is believed to have written the Histoire Naturelle des Indes Occidentales (The Natural History of the New World.) The Codex comprises seventy-nine hand drawn plates detailing the flora, fauna and aboriginal people that Pere Nicolas encountered during his years in the land he called the “North Indies” , which is now Canada. The Codex is a significant document as it is a rare example of early Canadian art. The drawings are also delightful in their fanciful and untrained style, and reveal how Nicholas saw the world through the lens of the similar and analogous, rather than the phenomenological or scientific. Francois-Marc Gagnon’s essay that accompanies the 2011 facsimile edition of the Codex Canadensis (McGill-Queens University Press) clarifies the differences between the way Louis Nicholas viewed his world and the way his more rational minded colleagues saw it, and sparks the question of what these colliding world views mean to us today.

Contemporary with the production of the Codex was a European style of needlework known as crewel. It was a popular method of decorating household upholstery, window and bedcoverings, and featured coloured wool threads worked on heavy linen cloth, depicting large scale repeating patterns of botanical and zoological motifs. (The earliest dated bedhanging (1696) is in the collection of the Royal Ontario Museum.) Primarily the work of women, the patterns reflected the changing knowledge of the world gained through exploration and colonization and placed it in a domestic context.

What I do is render, or translate, Louis Nicolas's drawings into embroidery, re-contextualizing them by adding elements of my own such as text or design. These pieces are large scale and I mount them on stretchers as I would a canvas for painting. Here's the last one I completed:
And here is the page of the Codex that I began with: 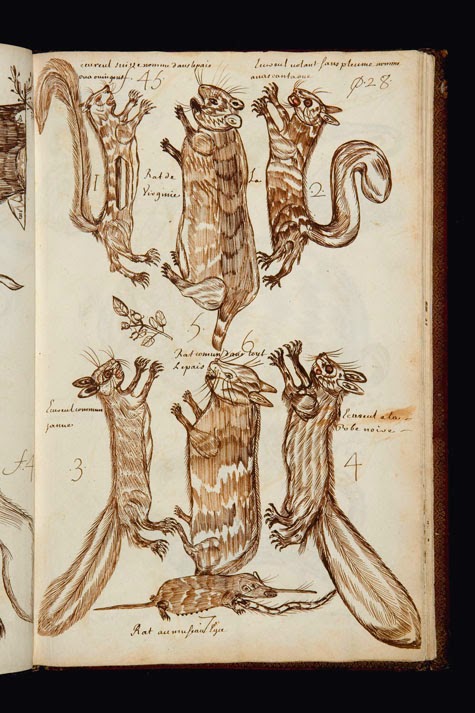 I look closely at the pen and ink images and try to duplicate them as accurately as I can in stitch.

Q.    How does my work differ from others in its genre?
A.    Good grief, what is my genre? I usually describe myself as an artist who works with textiles, which is pretty wide open. My art training was steeped in late post-modernism and feminism, which means I bring an intellectual, political and philosophical slant to a medium that is/was often seen as lacking such rigour. But this is a hard question for me to answer. I see other textile artists as compatriots, so I guess I look more for similarities than differences.

Q.   Why do I write / create what I do?
A.    I would go crazy if I didn't. For me, making art is manifesting what I see in my mind's eye. An idea will occur to me, or a problem will present itself or a truth will need to be revealed. When those things appear, they will ricochet around in my head until I get them out into the work. The Codex Canadensis stuff is a bit different. When I first saw the cover of the book, it was like the hand of God was on my shoulder, saying "Here, this is for you." There was an instantaneous desire to work with Louis Nicolas's images, which has developed into feeling like he and I are co-creators. (I'm sure if he would be shocked and appalled to think that over 300 years in the future some woman would be thinking so much about him.)

Q.    How does my writing / creating process work?
A.    I usually begin with an image or line of text that niggles at me, that wants to be recognised or honoured or explored. Most often, there is something puzzling or ambiguous about the core material, something that is not as it seems. It buzzes around in my brain, sometimes for days, weeks, months, until suddenly I see it, whole. I rarely change things too much from that "Aha!" moment - what follows is production, making manifest.

Sometimes the materials I start with prove to be too uncooperative, but most of the time I take on the challenge of mastering a difficult fabric or thread. That's where the surprises can happen. I used to be more of a control freak, but I have consciously tried to loosen my grasp and to listen more to the design, the materials, the inner voice of the object. I ask, "What does it need?" That comes from my art therapy training, letting the work speak, and listening to what it says.
And then, towards the end of the process, there is the important stage of "gazing upon the work". This is where I look upon the piece from a bit of a distance and wonder at the unique entity that is in front of me. I open myself up to the work and ask again, "What does it need?" There is an element of critical discernment here, it's not like I just let the piece blather on. I also ask myself, "Does this answer my initial question?" "How can I make it clearer? Stronger?" This aspect of distancing myself from the work is kind of a summing up, a final tweak. The piece is in the world now. I have been madly in love with it, and now I'm letting it go off and seek its fortune.

Well, blah, blah blah, enough about me! I have invited two other wonderful artists to join us on this trip, and they will be posting next week with their answers to these questions. From a remote south-eastern corner of England comes Sarah Fincham who says about herself:


A sociologist by training, Sarah found her way back to a childhood love of needle and thread via chronic illness, drawing and painting. She is highly tactile by nature and all her work, regardless of media, begins with touching the materials, feeling her way to an idea.

Her website is Small Offerings, where you can see her drawings and paintings, as well as her beautiful stitching.

And joining us will be Sima Elizabeth Shefrin from Gabriola Island in the Salish Sea, Canada. Elizabeth is another multi-talented artist who has illustrated children's books and organised an international peace quilt project. Her website is Stitching for Social Change. (I am helping her get her blog going. Hopefully it will be up by next Friday, but if not, she will be guest posting here.)