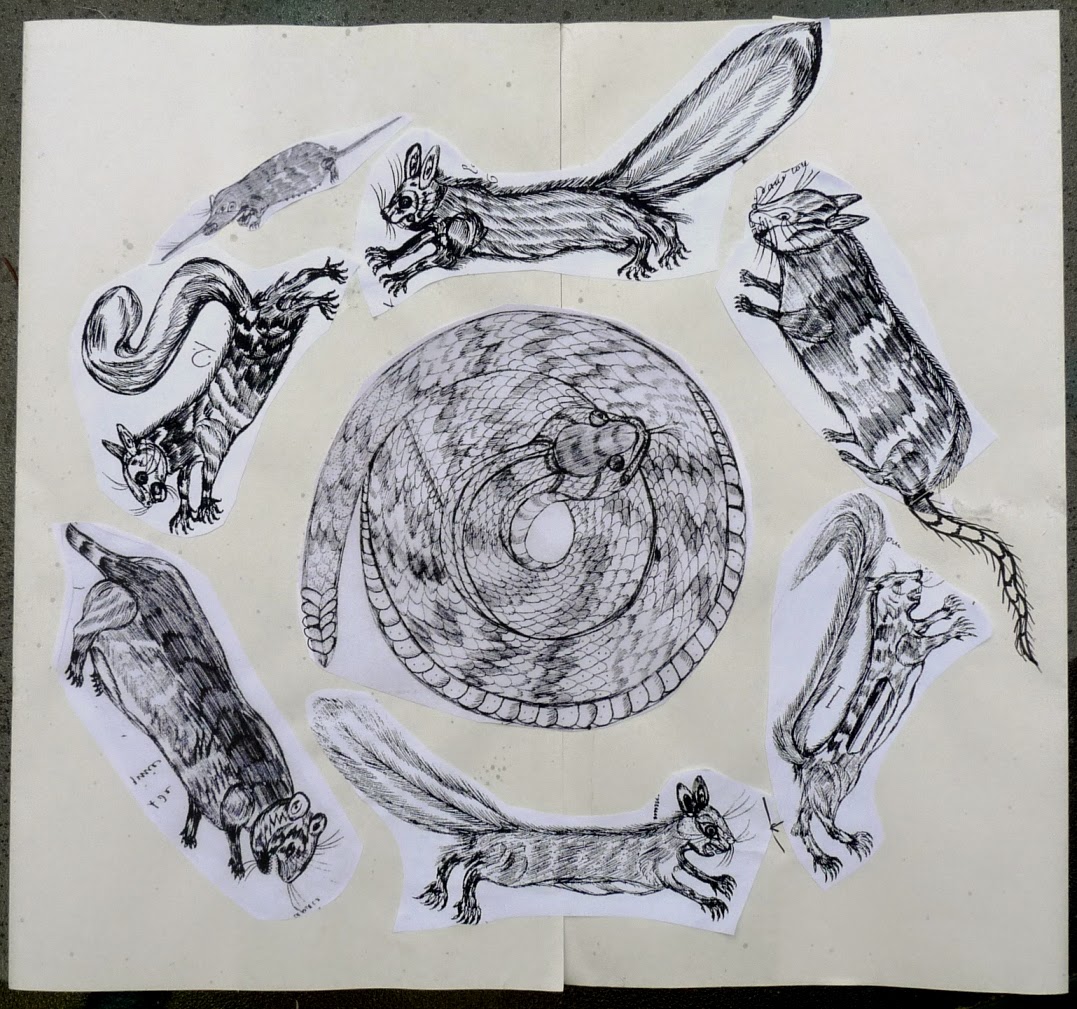 I have been playing with layouts for the next panel of the Codex Canadensis. I wanted to use the page with a number of small rodents on it, but I didn't want to copy the design literally this time, even though I kind of liked Louis Nicolas's layout.
I thought of a mandala of critters, so cut the little guys out of a photocopy and started playing with the arrangement. The idea of a hamster wheel immediately came to mind, so I first had them all chasing each others tail. But three of them are facing in the opposite direction, I reversed them on the scanner and tried it that way, which looked weird because the ones on the lower half were upside down. So I went back to the original squirrels, then reversed the big mole, so they are all going in the same direction, but it's a little more pleasing to the eye. I tucked the little vole (with the giant pointy nose) in at the top to help balance the composition.

Which left me with a big open centre. I thought of various things, a plant perhaps, but soon came to the coiled snake, from another of Nicolas's drawings, which I also had in the pile of images I wanted to work with. I think the snake works perfectly, on many levels. The spiral shape is elemental and dynamic. Both the snake and the rodents are sometimes considered base creatures, of the lower realms, and they have a bit of an "ick" factor. The snake is important symbolically in many cultures, and of course has huge theological baggage in the Christian tradition. But both the rodents and the snake are part of God's creation, and contain sparks, as we all do, of the emanation of the divine. And, thinking of what is edible, as Nicolas was always commenting about, the rodents would be the prey of the snake, so it puts the frenzied expressions of the little critters into a different context, that of hunter and hunted.

I'm not sure yet if I will add another ring of creatures - probably not, as there is plenty going on. I may add some text, or a border of some sort. First I am going to enlarge the layout 200% on the photocopier, which will make the embroidery more feasible, and produce a good size - about three feet square.