I received my first piece of evangelical Christian spam in my inbox today, and wondered if it had any connection to yesterday's post which does include a Biblical reference. It made me think that there may some question in people's minds as to my personal position as to religion and spirituality. Goodness knows this is tricky territory to map out on a blog, but perhaps a little background information might be useful.

First of all, I have to say that I think religious freedom is fundamental, and very personal. Everyone comes to their own place. Which means that if I am to state where I am on the spiritual spectrum, it will be relative to your own position. Which may make me a damned heathen, a wishy-washy agnostic, a New Age flake, or a secular humanist, depending. But I do believe that growing up and living in a culture that is founded on Judeo-Christian principles has a huge influence, and that shows up in my work surprisingly often.

Back in 1997 I did a sculptural installation titled Paragons, pictured above. I had just started bringing textiles back into my work, after several years of playing with light in 2 and 3 dimensions. Embroidered samplers were an inspiring form. Paragons came about after a joking conversation with a friend: "What if women had underwear to go with the seven deadly sins, just like we used to have panties for each day of the week?" This idea appealed to me so much that I had to make it "for real". 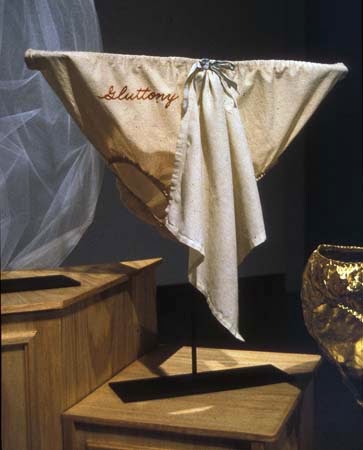 I built the wooden tiers and crafted each pair of panties to represent a sin. Above is Gluttony, with a commodious waistband and a dinner napkin attached. Greed is to the lower right, which was gessoed and covered with gold leaf. It was a fun piece to do, and I unearthed an article which was written about it which you can read here if you are interested (beware, there is artspeak.) In the same show I also did a series called Exemplary Men, illustrating the four cardinal virtues. 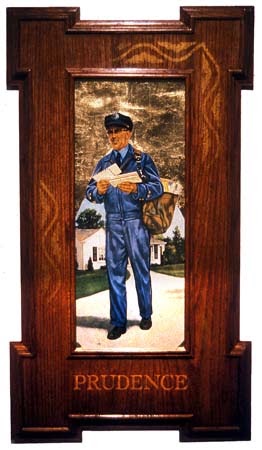 I made the frames based on a Russian Doukhobor icon I found in an antique store. The men were cardboard cutout teaching aids, presumably intended to show children who the good, responsible men were in the community. 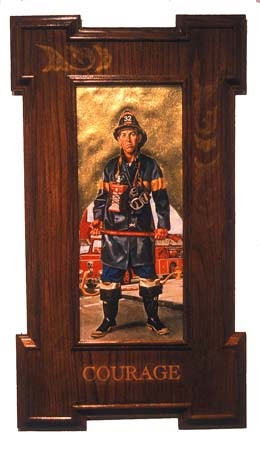 So, in these works I was referencing Christian concepts in an irreverent, ironic way. I intended no disrespect, and I think the work was primarily seen as gentle and humorous. A later series of paintings also referenced the prescriptive nature of Christian teachings. 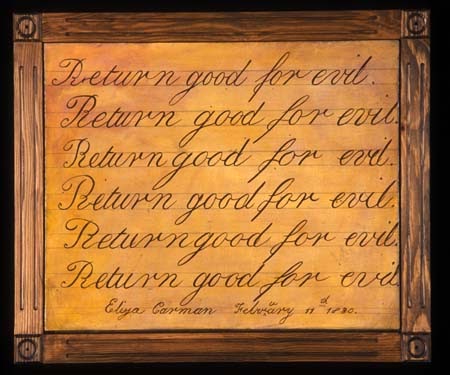 These eight painting were much enlarged, meticulous replicas of pages from a distant relative's schoolgirl penmanship exercises. Hmmn, seem familiar? I think my work has developed quite organically, with certain approaches and concepts recurring. (In other words, there is a method to my madness!)

So maybe it's not so surprising that I find myself now immersed in the work of a Jesuit missionary. I am trying to understand what he was all about, based on the scant evidence he left behind. I am trying to speak his language, in a way. When I embroider a quote from the Bible, it is intended to be a clue to the meaning of the work, not a representation of my own belief.

Yet, I also couldn't just use something that was completely foreign to me. That quote from the Psalms is something that I have added deliberately, and it does represent a choice I have made, after lots of research and sifting through various options. I like the sentiment: "Man shall come to a deep heart, and God shall be exalted." I chose that particular translation from several different versions. To me it means that the inner life is important, and when one yields to a contemplative, open way of being, and listens to their heart, they will connect to the essence of the universe, a higher power, God, or what you will.

Please forgive the crappy images. Someday I will have my slides properly scanned and set up a little online gallery of my work. But in the meantime, there's stitching to do!
ideas philosophy