Textile EMT To The Rescue 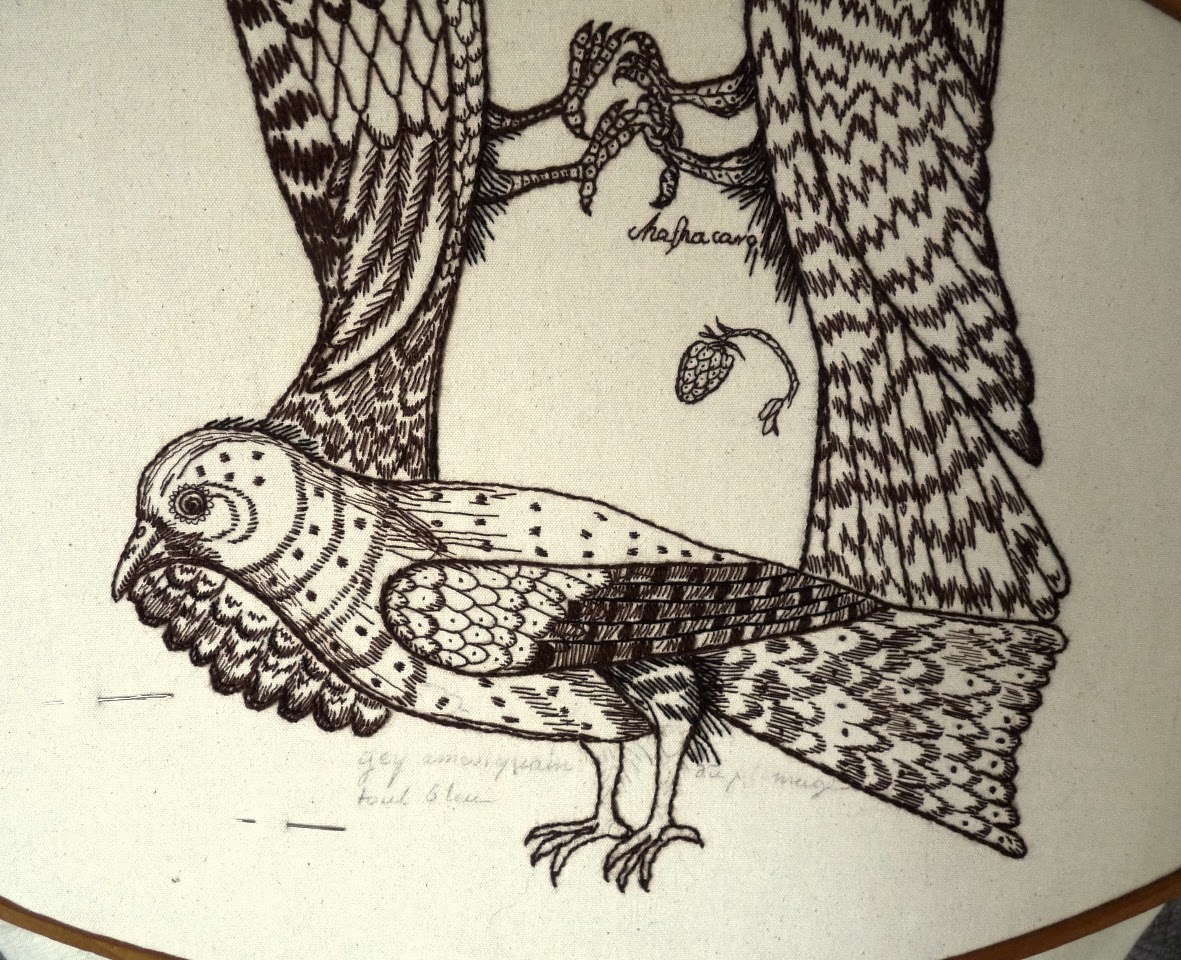 But first, a quick update. My dance card is full of projects. My favourite is still the Codex, of course, and the birdies are coming along. I'm almost finished the blue jay, but getting dangerously finicky with the thread. We have also been experimenting with a little video of the process, so I hope to share that with you soon.

I've finished two, count 'em, two quilt tops as a test quilter for Sherri Lynn's book. (There's still time to join in if you are interested.) But I am pledged to secrecy so unfortunately can't show them to you yet. Keeping mum is the hardest part of the process!

I also have a small embroidery piece in development for the annual Valentine's Day erotica show at the local art gallery. It's a hot little number so I am not sure how much I will share of it, but I'm pretty sure my readers aren't that prone to blushing. 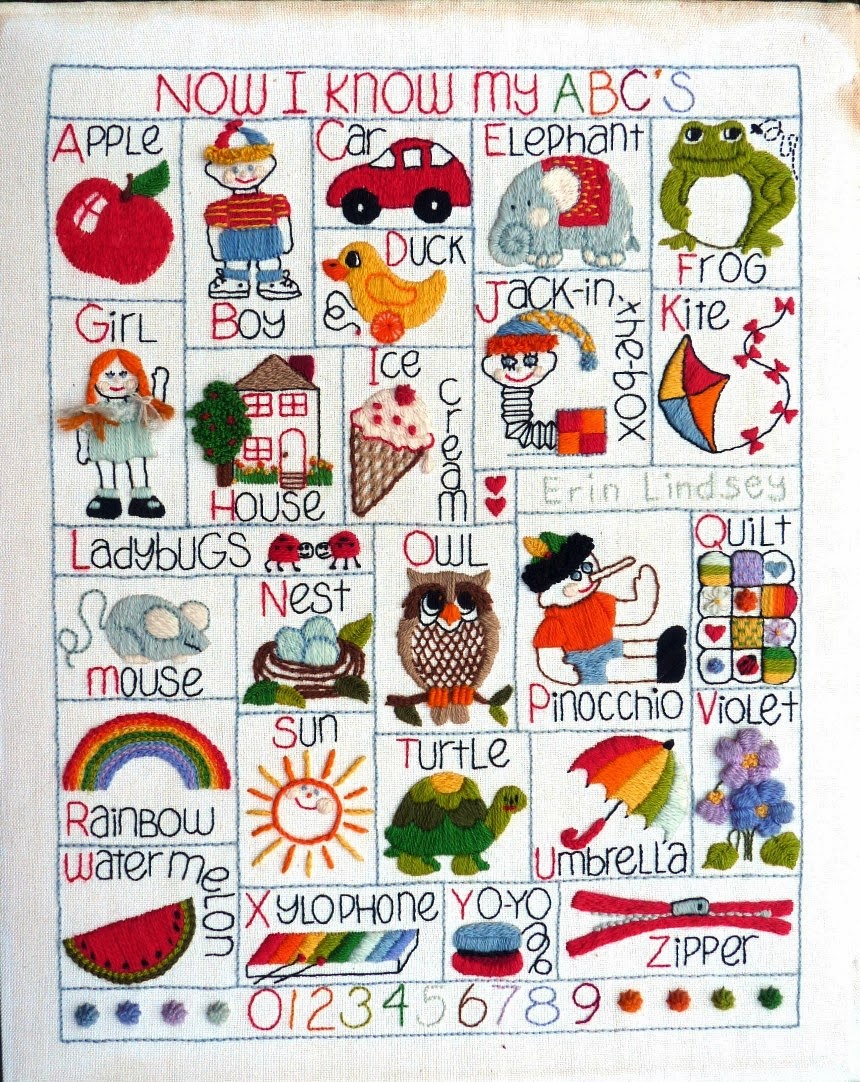 Now, on to last weekend's stitching resuscitation. I couldn't resist this charming sampler that was at the local recycling centre shop. It was absurdly under-priced at only six bucks, and beautifully stitched and signed by Erin Lindsey. There was some staining at the top edge, though, so I took it out of the frame with the intent of cleaning and remounting. 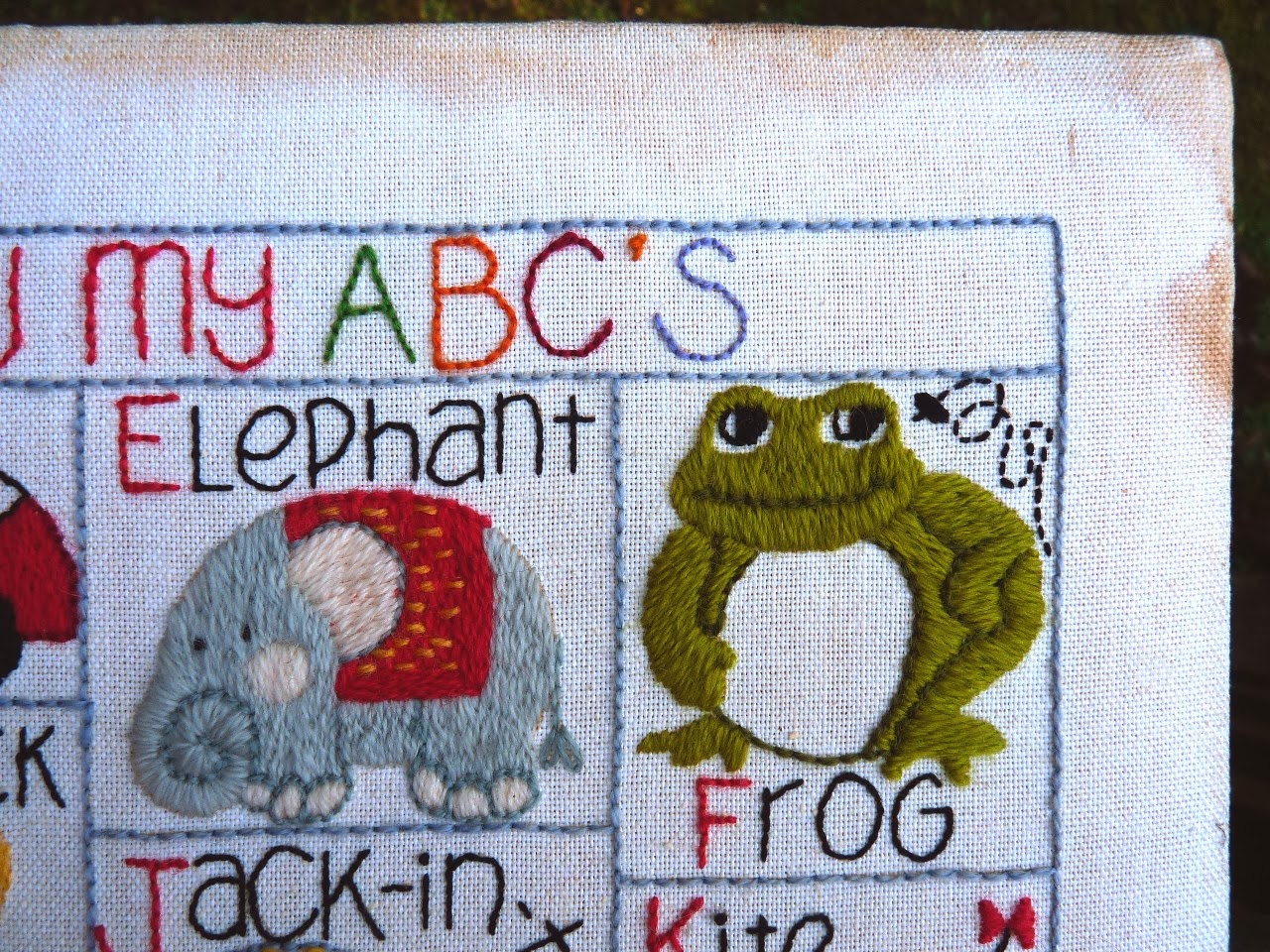 I was horrified to discover that the canvas had been glued in place on an obviously NOT archival mounting board.

How to get it off the board without damaging the stitching? First, I soaked a towel with water and laid it on the kitchen counter, and placed the board on top of that. Once the bottom layer of cardboard was saturated, I could peel off the cloth. White glue had been used, which is soluble in water, but the piece probably dates back to the early eighties, so the glue was petrified. 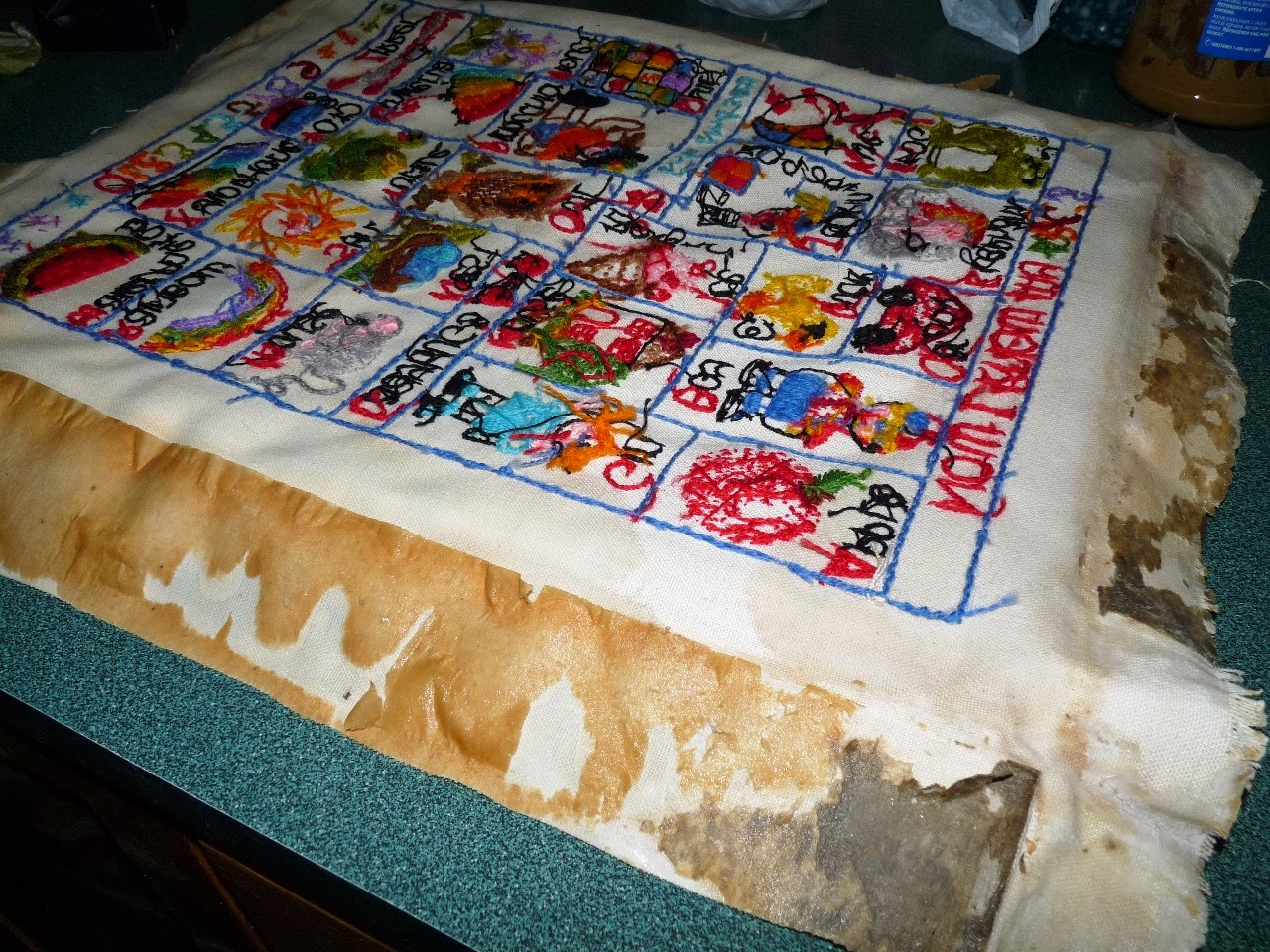 I folded the towel to the size of the stitching, and put it in the bathtub, which was filled with about an inch of water. I placed the cloth on top of that, stitching side up - the towel gave enough height so that the stitching was above the water, while the glue-y edges could soak. I left it overnight, and the next morning was able to scrape most of the glue off. I then scrubbed the edges with a bit of soapy water, and followed up with a sponging of well diluted white vinegar. I finished with a good rinse of the whole piece, being sure to keep the water temperature cool, and not to agitate the stitching at all, since it is wool.
It came out better than it was, although the discolouration is still there. At least I know it shouldn't get any worse. I suspect the acidity of the original mounting board was responsible for most of the problem, but was exacerbated by a layer of  foam padding under the stitching. The foam was very yellowed and crumbling.

I will now mount the stitching on an acid-free mat board, using thread lacing to hold the cloth in place. Mary Corbett has a good tutorial of the whole process.

During the cleaning process I discovered, under a hardened layer of glue, that the piece is Sunset Designs#2615, from 1979. Don't know if that is when Erin Lindsey actually made it, but I see that unopened vintage kits of that pattern are going for over $60 on Ebay. Crazy! It's shocking to think that an unworked kit would be worth ten times more than a well-executed finished piece on the re-sale market, even though I suppose nothing should surprise me anymore...