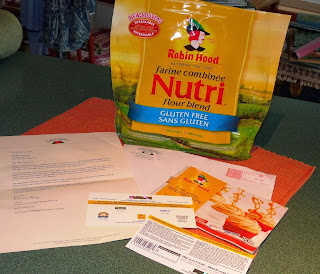 Now that the season for holiday baking is upon us, I wanted to share a recent escapade of mine concerning this new gluten-free flour blend from Robin Hood. It was on sale in my local grocery store, and I thought I would try it and see how it compared to Pamela's gluten-free mix that I had been using. (The Robin Hood was half the price of Pamela's.)

Let me digress slightly and say that I'm not following a gluten-free diet, but so many people are that I have been making the odd batch of gluten-free cookies for friends when they come over for tea. Personally, I think that the reason so many are finding that they are sensitive to wheat is because the poor old wheat plant has been bred and hybridized and genetically modified and sprayed with chemicals for so long that our bodies no longer recognize it as edible. I prefer to stick with organic grains, preferably heritage varieties, but god knows that's a trend unto itself and maybe we should just be thankful that we have food to eat at all.

As I warned you, a digression. Sorry.

Back to Robin Hood's fancy new product. My first quibble was with the packaging. A plastic bag? Well, maybe it is more resistant to the carelessness of box-cutter wielding stockboys, but really, I like paper better. Slightly less harmful to the planet and all... ooops, digression nipped in the bud. (Pamela's also comes in a plastic bag, but one that is recyclable.) 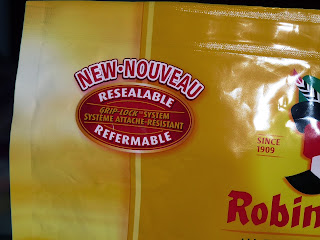 But no, this package is not a mere bag! It is a grip-lock system!!! A velcro-like band seals the bag closed. Thank God! After years and years of struggle with rolling up paper bags, or wasting precious minutes transferring flour into a canister, I am ushered into a care-free new age courtesy of the patented Grip-Lock System!

Huh! I thought I would try the flour in a recipe that I had made many times and knew was a good one. I substituted the  gluten-free flour 1:1. The dough was suspiciously dry and crumbly, but I baked the cookies anyway. They came out of the oven looking like rocks. Sampling revealed an unpleasant gritty texture, a mouth feel of sawdust, and an oddly synthetic sweet taste.

Well, to back up a little, the venerable company of Robin Hood is now owned by Smuckers, one of a select group of conglomerates that control most the processed food available in North America. I would be willing to wager that another of Smucker's subsidiaries happened to find itself with a surplus of sugar beet fiber and head office got the guys in the lab to come up with some sort of flour-y substance that could be marketed as gluten-free.... But that would be cynical of me.

So, back in my kitchen, being the good little consumer Mrs. D'Avignon trained me to be in Grade 10 Home Ec class, I decided to call the 1-800 help number printed on the bag, er, excuse me, Grip-Lock System. I reached Emily, a lovely, very professional, customer service agent. She listened to my complaints, suggested perhaps I would have better success following the recipes developed specially for this flour blend, and offered to send me some coupons, which arrived yesterday. 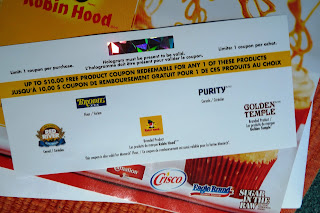 Woohoo! Two $10 discount coupons for any of these products!! Well, it appears that not only Robin Hood, but Brodie, Purity, and Monarch flours are all part of Smuckers's empire now. And my childhood staple, Red River Cereal. And Golden Temple, which I am not familiar with but sounds like Asian noodles or rice. As well, Carnation and Eagle Brand milk, Crisco shortening, and Sugar in the Raw are in the Smuckers fold. And Folger's coffee. The list continues on their web site, listing fifity-two companies and product lines, including some that surprised me: Santa Cruz Organics, Crosse & Blackwell, Habitant, and sadly, since I almost live on the stuff, Adams Natural Peanut Butter.

To think it all started 115 years ago with apple butter sold out of the back of a wagon. I wonder what founder Jerome Smucker would make of where his company is now (taken from their Wikipedia page):


Throughout 2012, Smucker's contributed $485,000 to a $46 million political campaign known as "The Coalition Against The Costly Food Labeling Proposition, sponsored by Farmers and Food Producers". This organization was set up to oppose a citizen's initiative, known as Proposition 37, demanding mandatory labeling of foods containing genetically modified ingredients. Approximately 70% of the funding for the initiative was provided by a PAC and by companies with financial interests in the organic foods industry, with most of the remainder coming from a handful of wealthy individuals.[11] Following rejection of the proposition in the November 2012 referendum, organizers called for a boycott of companies funding the campaign to defeat the referendum.[12]

Chances are that I won't be buying Nutri gluten-free flour again. Or any of that other stuff. Sorry, Emily.

completely not related to anything textile consumerism food