on September 30, 2013
It hasn't even been four weeks since I took over the plot at the Community Garden, but lots of progress has been made. Most of the weeds have been pulled, except for the small patch in front of me. I put in some raised beds, and added a whole bunch of mulch. Garlic has been planted, and radishes are coming up. There is some winter kale in the middle bed. There are a few mizuna and arugula volunteers, and I have seeded some winter lettuce and corn salad.
Here's the "Before" picture in case you didn't see the earlier posting. 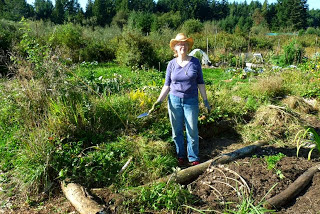 I haven't usually done much of a winter garden, but since I didn't have a garden to muck around in all summer, I have a lot more energy to get something started this month. Our climate is so mild here that many people are able to have brassicas, leeks, and root crops going through the winter.

I'm hoping to get that last patch of weeds cleared and some fava beans seeded before the rainy season really sets in.
Garden island life