The Latin text says: "These are they ye shall not eat:". I can't imagine these birds would be very tasty anyway, probably like fish-flavoured rubber bands! They are, from the top down: a young American eagle; a nighthawk; a small hawk (maybe a sharp-shinned); and a gyrfalcon.

This panel completes Deuteronomy. The four panels are meant to be viewed as a series, which I hope to present to you via the magic of Photoshop. Maybe tomorrow, if all goes well. 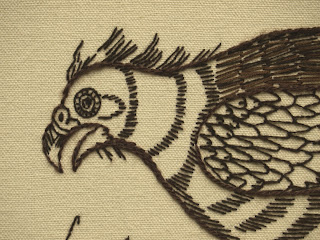 Pretty hirsute for a bald eagle! I just stitch them as I see them, or rather, as Louis Nicolas saw them. 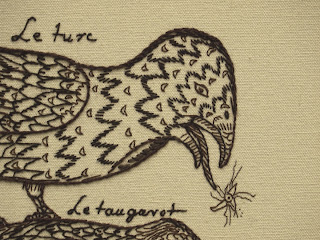 The nighthawk, which isn't really a hawk, so technically doesn't belong on this page, feeds mainly on insects. I love his long tongue and the alien-looking bug.

I'm not yet done with the Codex. No rest for this wicked one. But I do have a couple of sewing jobs for other people, so will have a wee break.
codex canadensis embroidery Louis Nicolas