Well, the fourth panel of Deuteronomy (actually the third to be stitched) is complete. Now I just have to stitch the first panel and the whole series will be finished, if that's not too confusing. I've confused myself quite a bit with this one. The second and third panels are in their new homes and I discovered that not only had I failed to make a note of the colour and number of strands used for the Latin text, I had also neglected to save a detailed photo of the other panels before I sent them on their way. Since they are intended to be viewed all in a row, they will only make sense if the text matches. (And just for those of us who don't read Latin - the text at the bottom basically says: "Don't eat us.")

I did finally figure it out, but that will sure teach me to trust my sieve-like brain to retain anything important. Why, oh why can I instantly remember the name of the actor who portrayed Colonel Klink in Hogan's Heroes (a recent crossword puzzle clue) and at the same time completely forget the password for my bank card? I am going to turn into one of those people who carries a little notebook with them at all times - wait, has anyone seen that little notebook?...It's a lost cause. 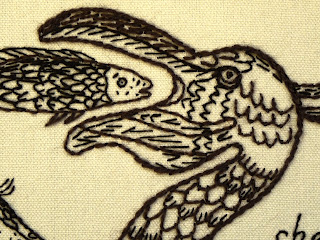 Meanwhile, have a look at this pelican compared to the one from Arbor Vitae. The new guy is about 2/3 the size, and thinner yarn was used. Check out the difference in the stitches, and the choices I made in rendering the same image - in both cases I worked from a photocopied enlargement of Louis Nicolas's original pen and ink drawing. (But I obviously couldn't remember what I did before!)