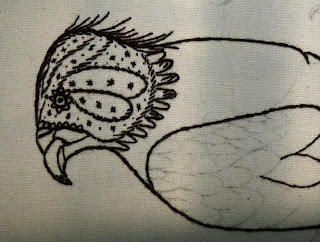 The last panel of Deuteronomy has been started. This one is a group of four raptors: a young bald eagle, a night hawk, a sparrow hawk and a gyrfalcon. Louis Nicolas seemed to have a particular fondness for hawks, devoting a long passage of the Histoire Naturelles to the art of falconry. He had his own names for the birds though, calling the nighthawk "Le Turc", the sparrow hawk "Le Taugerot" and the gyrfalcon "Le Brilhand". Great names for characters in an opera!

I've been working on this project more or less continuously for the last year-and-a-half. Over that time I can see a change in my stitching vocabulary. When I started out with the Arbor Vitae, I think I was interpreting Louis Nicolas's drawing in embroidery stitches, whereas I am now more into making marks in the spirit of the original. This means my embroideries are not quite so pretty, and are more "sketchy" rather than relying on the rhythm of pattern that develops as the stitches repeat.

This feels like I am getting deeper into the nature of the stitch, working with the inherit limitations of what is basically a line between two points. Think of it: the needle goes in at point A and comes out at point B. The shortest distance between two points is a straight line, so whatever loops and twists and variations we introduce between these two points to create different stitches are just embellishments on that straight line. This fundamental truth about how a stitch behaves has led to a vast array of techniques, some of which exploit the straight line (cross stitch), and others that push the limits to create the illusion of realism (Japanese silk embroidery), and others that just play with the possibilities of needle and thread (crewel).

I don't know quite what to call my own technique with the Codex Canadensis. I guess it is just freeform, based on a few basics such as outline, double running, fly, and chain stitch. I do some couching too, but all of this is done while referring to Louis's drawings. I am becoming more familiar with his lines and almost automatically translate his marks into my stitches. I have no idea at this point how successful I am in achieving an accurate translation, but I continue to find the process mesmerising and deeply satisfying. 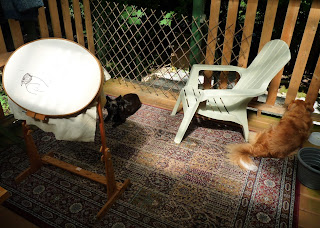 With the nice weather, I have been working out on the covered deck. It's very pleasant, and my two studio assistants are at the ready to greet anyone who comes by. The little black cutie is James's dog Mischa. She and Gracie have become the best of friends, which is so nice to see.