I Think I've Got It

Well, soon it occurred to me that since Pere Nicolas was Catholic, he wouldn't have been using the King James version at all. No, it would have been the Latin Vulgate. So I found the passage online (this is when the internet makes working on a remote island possible) and then went back to the manuscript of the Grammaire Algonquine, which was, remember, in his own handwriting. I enlarged sections of that, and traced off the Roman capitals that he had written in various headings, and created my own Louis Nicolas hand drawn alphabet. 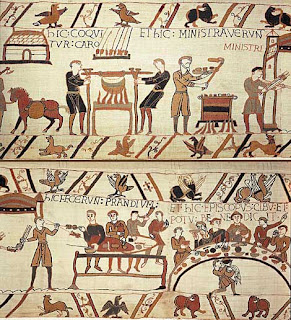 Then, in the style of the Bayeux Tapestry (See? I told you there was a connection!) I divided up the text and placed it on the four panels. Only the owls are complete, but I wanted to show them off. There will be a panel of eagles to the left, and the swan and pelican to the right.

I embroidered the text in a lighter value embroidery floss using Holbein stitch, as I didn't want the lettering to be too dominant. Words, even ones we don't understand, are always first to grab our attention. What the text translates to is basically: "These are they that you shall not eat,[list of birds] every creeping thing that flies is unclean, of these do not eat."

Now, I can understand why carrion eaters might be prohibited, but why would swans be unclean? I asked my uncle, who is Jewish and quite orthodox, so he knows all about the prohibited foods, and he didn't know either. Oh well, a little mystery never hurt.
codex canadensis embroidery Louis Nicolas