on January 30, 2013
Regular readers will know that I have an interest in the connection between psychology and textiles. This week, two avenues of investigation opened up.
First, there was an interview with Marina Warner, fairytale expert, on CBC's Writers and Company. She was talking about her latest project, a book about Sheherazade and the Tales of the Arabian Nights. She mentioned that Sigmund Freud's famous couch, upon which psychoanalysis began, was covered with a handwoven Persian carpet. Aha! A quick Google search revealed this essay: Freud's Couch, A Case History. It's a fascinating read. Here's a bit where she begins by quoting Goethe:


"Here we find ourselves in a factory of thoughts where, as in the ‘weaver’s masterpiece’”:

a thousand threads one treadle throws,
Where fly the shuttles hither and thither,
Unseen the threads are knit together,
And an infinite combination grows.

Freud describes how his method requires him to look intently at the threads and, he continues, at “the nodal points” meet. The lines connect to H.D.’s “tangled skeins,” and to her own finely spun metaphor about Freud’s voice dipping the gray web of conventionally woven thought “into a vat of his own brewing” and drawing out scraps of thoughts in new colors to become flags and pennants and signs. The imagery is hardly original, but it gave Freud and H.D. a way of speaking about a deeper layer beneath conscious and deliberate utterance. In the same decade Freud pressed it further, to provide a metaphor for the unconscious order of expression. He analyzed his own dream-thoughts and invited his patients to express theirs as they lay on the couch; in collaboration with them, he tried to discern the patterns and connections in the weave, the figure in the carpet.In relation to the concept of the psychoanalytic method, it is worth reconnecting the linguistic uses of this figure of speech to the material properties of carpets. A carpet maker conjugates structural motifs “in infinite combination,” as Freud wrote about his dream analysis, within a basic structure of frame, ground, and figure, and then inflects each one differently through variations of color, dimensions, quality of materials.


Well, speaking for myself, reclining upon such a couch couldn't help but bring forth meaningful insights. 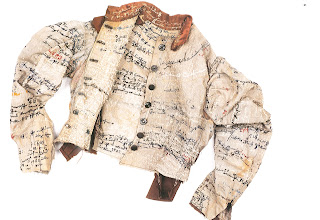 The other interesting tangent was sparked by a link  on our dear Jude Hill's blog, about the heavily embroidered jacket of Agnes Richter, a patient in a psychiatric hospital at the turn of the last century.(N.B. It's not a straightjacket, just a jacket in the style of the time.) I had known of the fabulous  garment from my art therapy training, but Jude's post sparked me to investigate further, and I was able to order Agnes's Jacket from the library. It too is a fascinating read, about a different way of dealing with what is normally seen as a symptom of psychosis - hearing voices. Given North America's heavily medicalized approach to dealing with mental illness, I was very surprised to discover a different approach to what perhaps may be more fairly described as "auditory phenomena".

I haven't got to the end of the book yet, which appears (from my skipping forward) to deal more specifically with Agnes's remarkable jacket. But I am sure that it will confirm my hypothesis that stitching and thread describe the fundamental nature of the universe. Or something like that.
ideas