The Story of MY Stuff 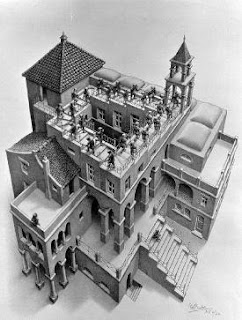 Sorry for being incommunicado for the last while. After a fairly easy transfer of some of my stuff to Lasqueti, I returned to Salt Spring to help the chef move his stuff, and the rest of mine, to the lower suite of the duplex. It was like an M.C. Escher print: endless trudging up and down stairs, laden with boxes and armfuls of books.

Then cleaning the upper suite in preparation for the new tenant, which took far longer than it should have, since I was determined it wouldn't be draped with cobwebs and teeming with dust bunnies, the way it was when we moved in. It is amazing how one can think they are living in a clean house, and then once all the furniture and knick knacks are moved out, discover enough cat hair to build several new cats.

I'm back on Lasqueti again now, trying island hopping for the winter. As I carried yet another box of stuff up the ramp from the ferry, I reflected on a lifetime of moving house.

I have moved over 40 times in my adult life. I've never hired movers, an unthinkable luxury, although I have usually been lucky to have volunteer help. I've moved in snow and torrential rain, back and forth across Canada and into the States. I've used moving conveyances of every description. I consider myself a reluctant authority on moving. I can even almost carry furniture not like a girl. But, most emphatically, I hate moving.

If I hate moving so much, then why do it so often? Many people would see this as a sign of some kind of domestic dysfunction, or a pathological inability to settle in one place. Let me plead my case.

Looking back, it has been rare for me to move simply because I didn't like where I was living. Other than a ten year period of home ownership, I have rented, so some of the moves were due to leases being up, rents being raised beyond budgets, or the landlord's daughter wanting to move in. In Toronto, I once lived in a series of nice houses that the owner was flipping like dominoes in a hot housing market. Often I was trading up, or being offered a great deal for a short period of time.

When I was younger, I didn't mind all the moving. I had a great team of friends who didn't seem to mind hauling all my stuff up three flights of stairs.(Granted, I had fewer books then, although I did have a set of free weights.) I didn't think it odd that my friends always seemed to stay in one place, while I moved regularly. Maybe they had too many books, cheap rent, a great location...

Then I hooked up with a mathematician who was going through the requisite post-docs and career-building moves to various cities. Those were serious moves requiring ever bigger U-Hauls, and at one point, because we were crossing into the U.S., a complete inventory of all our stuff, down to the number of pieces of cutlery. The border guard shook his head and said he had never seen such a thorough inventory, making me feel like I had wasted weeks of counting and itemizing. I guess not that many Virgos went through that crossing!

Later, the mathematician got tenure and we bought a house two blocks from where we were renting. This is where I can see that my years of transience were starting to show. Thinking I would be practical and save money, and get some exercise in the process, I borrowed a shopping cart from the grocery store and moved much of the small stuff in the cart. No wonder my biggest fear is becoming a bag lady.

A major move west to Nelson, BC had my new partner (a good-looking ne'er-do-well) driving a 27 foot truck jammed so full the wheels were bowing inwards. I followed behind in the Toyota, also jammed full, with Angus perched on my lap, paws resting on my left forearm, looking out the window and meowing the whole way. Another indelible memory of that move: 27 crates of vinyl LP's. Uh huh. I did say ne'er-do-well, didn't I?

Several years later, leaving him and his record collection to enjoy each others company, I made my first major purge of possessions and moved further west to Vancouver, where I discovered Craigslist and its magical "Free" category, where I could post that huge china cabinet that didn't fit in my apartment and have it disappear in an afternoon. This marked the beginning of my awareness that there is such a huge pool of unwanted/unneeded stuff in the world that it is possible to avoid monetary transactions altogether. Unfortunately for the pack rat in me, it can be easier to acquire free stuff than to get rid of it, but gradually I have been able to distinguish between wants and needs, and the pile of stuff has gotten smaller each move.

Finally, I moved to Lasqueti by barge and wrote about it here. Re-reading that post, I'm surprised there were just five pickup trucks loads. I remember I had hardly any furniture, but there were still an awful lot of books. And boxes and boxes or fabric.

Living on a small remote island where everything has to be carried by hand up and down ferry ramps makes one very conscious of how much stuff weighs, and requires careful consideration if it is really needed or not. I am happy to say I am now down to one pickup load of stuff. No books! ( I made a large donation of my best textile books to the new Salt Spring Library, gave a couple of boxes of art therapy books to a grad student, donated a stack to the Literacy fundraiser, and left several bags at the Recycling Centre free store.) Only a couple of boxes of fabric.

Have I learned anything from these many moves? Besides to bend at the knees when lifting? Primarily this:
Material possessions can be a burden, both physically and psychologically. I've already made my New Year's resolution: to end 2013 with less stuff than I start it with.