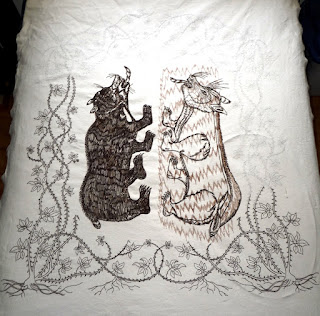 Well, it's a poor picture but the grey day doesn't allow for much better. I wanted to share the progress of the bear's border. It's happening a little slower than I had hoped, but it's half done and entirely possible to finish before 2013. 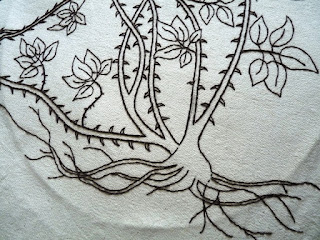 I am mostly working in outline stitch, straight stitch and double running stitch, but not being too particular about conforming to regulations. I am using a cottolin weaving thread which has the same matte texture as the tapestry wool of the bears, but is a bit thinner. It also tends to shred a little so I am using shorter lengths, which means more stops and starts, but overall the stitching is going well.

Yesterday I saw a barred owl perched on a fencepost, so I will take it as an indication of where I will go next. I haven't decided yet which pages I will use. This?
Or this? What do you think?

Both pages can be found on the Library and Archives Canada site which shares the Codex Canadensis with the world.