A Bower of Bears 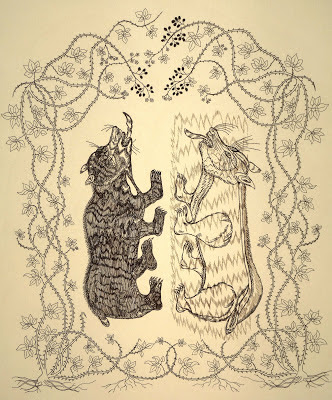 Not only did the world not end, I finished the bears. Well, almost. I think I will rework a couple of small areas, and I still need to sign it. But I stretched it on the frame so I could assess it as a whole for the first time. Up until now, I had only been able to view it spread out on the bed, which gave me a skewed perspective.

Last night, I was working on it until the power went out. (The inverter gets shut off around 10 p.m. as my landlords have sensitivity to electro-magnetic fields.) I was on the last little clump of leaves, so I put on my Pezl headlamp and finished it by LED. To be true to Louis Nicolas, I suppose I should have done it by candlelight!

I'm not sure how I feel about it at this point. I was in love with it while stitching, but now I need some distance. I'll live with it lurking in the background while I devour Hand Stitch, Perspectives, which arrived today from England. It looks fabulous - juicy and meaty and really smart.
codex canadensis