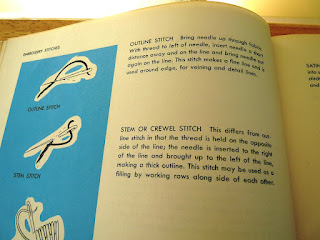 I have been embroidering since I was about 12 or 14. I learned from a book, maybe even a pamphlet from the yarn store. My Mom was capable and creative in many ways, but she did little needlework, so I don't think I learned much from her other than how to knot the thread. This is my excuse for not knowing that there was even a difference between Stem Stitch and Outline Stitch until this very afternoon. 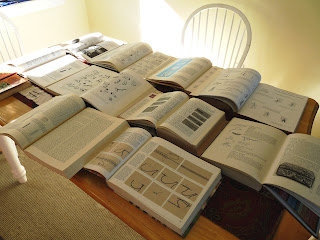 I pulled all my stitch books and looked up both Stem and Outline Stitches. Out of fourteen books, only two depicted them as being distinctly different. Another five noted a difference but said it didn't matter as long as you were consistent. Five more had just one or the other, and two had neither! 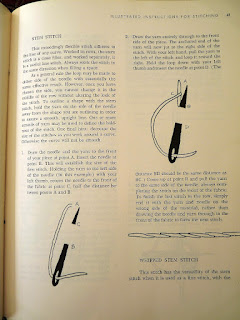 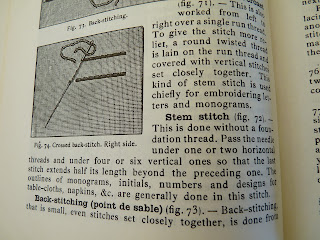 One was very strict and said only working with the thread on the left was correct, anything else was WRONG! 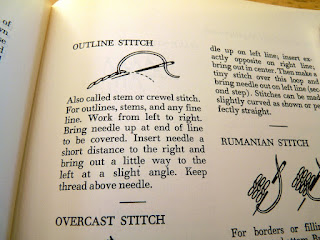 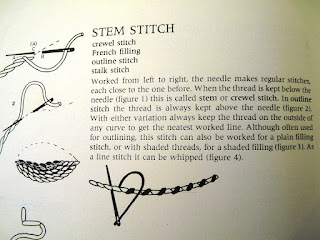 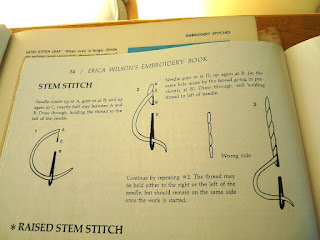 Erica Wilson, the grand doyenne of modern needlework, said that Stem Stitch was very useful for outlining, but never suggested that there might be something else actually called Outline Stitch.
And oddly enough, the usually comprehensive Mary Thomas didn't even mention it at all, perhaps since she classified her stitches by genre rather than method. 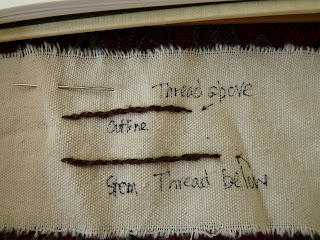 It's no wonder I was in the dark all this time. Making a sample helped me see this difference. When worked with the thread above, the stitch is a little more full and irregular. With the thread below, it's a little smoother. But if someone didn't spend half their life in front of an embroidery hoop, they would never notice.

It's clear than there is a huge range of opinion where even the simplest stitches are concerned. And in seeing the many different ways the instructions are worded and illustrated, I don't think one is any clearer than another. It's a difficult thing to depict a kinesthetic action in words or diagrams. Video or even learning in person should be better, but might not be depending on the individual involved.

And of course,in the end the name doesn't matter a bit. What's important is that you get the effect you want, however you contrive to achieve it.

I got caught up in all this minutiae whilst working away on the bears, and thinking that what I am doing is mark making, not crewel embroidery. My stitches are really quite willy-nilly, and although I consult stitch directories for inspiration, I don't actually follow them that closely. My process, what I consider one of translation, is based more on the material I am working with than formal technique. It might sound banal, but is actually kind of a revelation for me.
embroidery