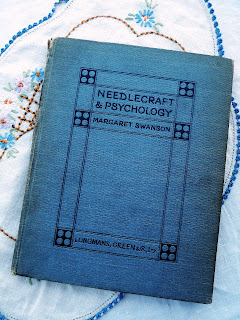 I mentioned this book a few posts back. The dear chef took note and look what I got for my birthday! Pretty cool, since it is very hard to find.

So, Margaret Swanson co-wrote Educational Needlecraft with Ann Macbeth. Both women were closely affiliated with the Glasgow School of Art in the early part of the 20th century, the period when it was a hotbed of influential Arts and Craft Design, led by Charles Rennie Mackintosh. That book is fairly available and can be downloaded here. 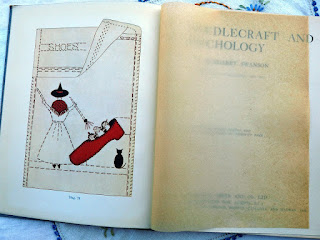 Needlecraft & Psychology builds on the approach used in the first book, that is, a progressive program of introducing stitches and projects to build a child's skills not just in needlework, but in practical logic, aesthetics, and conceptualizing. The child's emotional and intellectual development is also considered in depth. There would seem to be an awareness of  Jean Piaget's theories of childhood development, even though they would have been very new at the time this book was published (1926.) There is also evidence of Swanson's familiarity of Freud's theory of the unconscious, but this is just touched on. 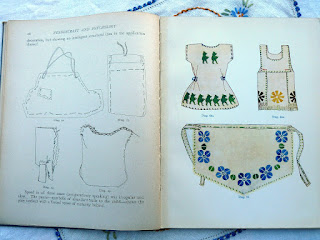 The projects, (which are also assessment tests) are set to follow a child from kindergarten through to the middle teens. Much emphasis is placed on allowing the child freedom to make what he or she chooses, and simple materials such as plain muslin and colourful threads are recommended. The illustrations are of actual projects completed by the children Swanson worked with, and appear to be faithful records of every knot and stitch. 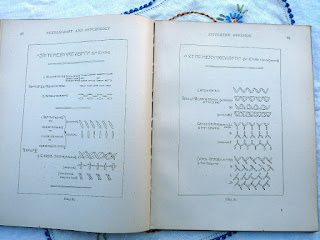 Each chapter concludes with a compilation of the stitches used. What is quite fascinating is that there are not necessarily the usual outline, buttonhole, satin etc., but stitches developed naturally by the child in experimenting with simple running stitch. Consequently, the rhythm and repetition of the stitch leads to different juxtapositions and groupings of stitches of different sizes and angles to form decorative and functional patterns. 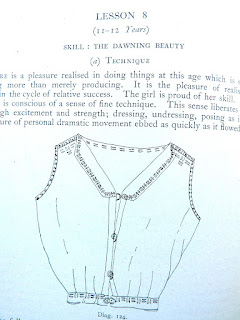 The style of writing is a bit quaint and hard to follow at times, and there is the unfortunate use of the terms  "high intelligence", "normal intelligence" and "inferior intelligence". I take it that Swanson is referring to intelligence as a developmental level, not a measure of the child's ability to learn and create. She does make note of how a particular child will catch up to her peers over time, so it doesn't appear that being categorized "sub-intelligent" at the age of 5 led to streaming or being grouped with others of that level. 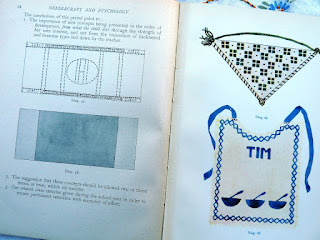 This is a lovely book for teachers of children, especially those of Montessori or Waldorf schools. Some of the projects are dated, but because the emphasis is on free play, that doesn't really matter. It's the process that's important. Textile lovers might also enjoy this little treasure, for its charm and Swanson's obvious passion for cloth and sewing. There is still a book to be written on the clinical psychological aspects of sewing, but anyone interested in educational or developmental psychology will find this one fascinating. 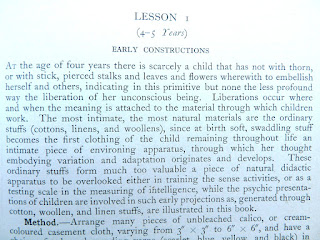 If it sounds like I'm doing a sales pitch, well, I am! The dear chef was so excited in his haste to order the book he accidentally bought BOTH copies for sale on Abebooks. I am keeping the one with the sticker of Reading University on the cover and offering the other for what he paid: $55.00 Canadian, including postage.  I know, a shocking amount for an old book, but since the publisher lost their entire inventory in the Blitz, and subsequently went out of business, this is an old, RARE book. If you are interested please leave a message in the comments, and we will go from there.  A lucky person snapped it up!