The Path of the Thread 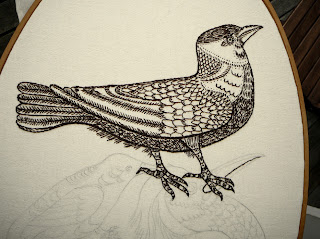 Bird 1 (of 3) is completed. You can see the two birds to come in pencil underneath his claws. I usually trace out just the main lines of a form, and fill in the detail freehand.

It's coming along well. I feel a little more comfortable with the crewel thread. It has quite a noticeable difference in smoothness if I stitch in the direction of the twist, so I run my fingers along each length of yarn as I cut it to feel which way feels smoother, and thread my needle that way. It makes a big difference in the appearance of the stitches, and I don't feel as if my thread is going to drift apart.

An odd line of outline stitch appears under his right foot. It's actually part of the beak of the pileated woodpecker below. I had some thread left after finishing the foot, and rather than waste it I just kept stitching. I realize that this habit of mine is part of the problem I had in counting the cross stitch piece I just finished. Rather than   doing the logical thing and working in rows and "parking" my threads, I tend to work in sections that are determined by the colour and length of my thread. I try to work adjacent areas of the same colour as much as possible, trying to be economical with thread and knots. It's not the smartest strategy, since I end up with stitches in the wrong place more often than not.

According to the text of the Histoire Naturelle this little guy above is probably a gray jay, although he is identified as a "Pie ameriquaine" on the page. Pere Nicolas seemed to classify the animals in the Codex by their similarity to what he already knew. The closest he could come in naming a Canada Jay was by relating it to the European magpie.

I found an interesting passage in the Taschen edition of Albertus Seba's Thesaurus, called Cabinet of Natural Curiousities. Seba was a little bit later than Louis Nicolas, but shared the same spirit of exploration and inquiry that was typical of the time. Here's the quote:


Albertus Seba's Thesaurus was composed during a period of great change, which is what makes this work particularly interesting from today's point of view. In the first half of the 18th century, the study of biology was thriving, making its first strides towards becoming a true science. Even though the term "biology" was already in use by the close of the 17th century, it had to await the beginning of the 19th to become officially introduced. The longstanding links to medicine and the healing arts meant that scientific concepts in this field were already well evolved. But the boundary with the arts was not yet sharply defined, and the Christian world view remained a pervasive influence. The prevailing view was that all of God's creations, including plants and animals, fulfilled a specific purpose. Ultimately, everything in nature was of use to humankind, the crowning achievement of Creation. If all of God's creations fulfilled a purpose, then, evidently a divine order must exist, a harmony of the cosmos. Thus an important aspect of the natural sciences, which incorporated what we would call the biosciences today, was to decipher and understand this order. This, in turn, would bring man closer to God, for God was to be understood above all through his works.

This makes a lot of sense in understanding what Louis Nicholas may have taken to be an important part of his mission in the New World. He would have had a rationale if quizzed by his superiors about why he spent more time drawing than saving souls.

There is another bit from the same essay:


In the first half of the 16th century, plants and animals were still categorized primarily by their uses to man, or were simply sorted alphabetically, as in the mighty Historia Animalium by Conrad Gesner, a splendid tome of over 4000 pages.

Gesner's work is considered to be a primary source for much of Louis Nicolas's Codex. Nicholas though, made an effort to group or classify the creatures he drew by the number of feet they had, and whether they were creatures of land, air or water. This one of the aspects of Nicholas's work that fascinates me: his struggle to understand the world around him, and the way he built upon what was already known.
codex canadensis embroidery nature