Don't Go Into the Woods Today 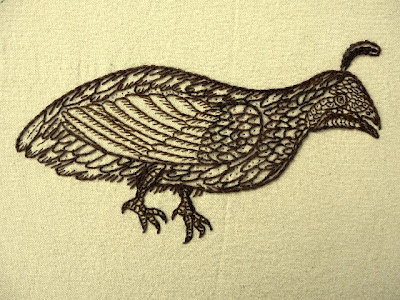 This quail, although relatively small in relation to the whole piece, commanded quite a lot of my attention. There is a lot of detail, which I could have left out, but I have a strong feeling that every element has to be given the same amount of care and psychic energy. It will make a difference in the finished piece, which sounds like simple logic, but it feels like more than that.

When I was in art school I took several painting courses, even though I recognised that I was not much of a painter. I learned the most from Tom Dean, who would go on these rhapsodic philosophical monologues while the class brushed and scumbled. He would talk about such things as the "sexual tension" between a chair and floor, and how to render that on canvas. It was a very visceral and expressive approach to creating an image. I am trying to draw from that approach as I translate Louis Nicholas's pen and ink creatures into needle and thread, and at the same time be true to the original image.

It's paradoxical. What I have ended up with has very little to do with painting, and I imagine Tom would be rather unimpressed with my efforts. Here's a wolf: 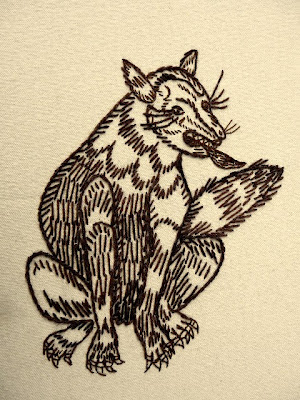 and here are Tom Dean's words about his 2001 sculpture, Desire, in Toronto's Sculpture Garden.


I empathize with these swans. Fat flying snakes, meandering, labyrinthine momentum that has evolved a proud vertical architecture under the drag of gravity, and an appearance under the imperative gaze of others. These swans, in their proud maturity, are the hollowed out libidinous shells of a vanity, erect in the posture of pride and dignity. They are magnificent dinosaurs, monsters, heroic, tattered, ramshackle, bewildered and aghast. They are disbelieving and incredulous at the tide of ignorance and vanity rising in their wake. They are confronted by the cherubs – tender sensual particles, seed and fruit of the erotic body. They arch their feathers and rise to their full stature, doomed dignity confronted by the insolent self-assurance of the future.

(You can see a picture of Desire here.))
From the time of Louis Nicolas and European exploration, Canadian culture has been fraught with the tension between attraction to the wild, dark unknown of nature, and the urge to tame, civilize and profit from it. Our artists, poets and writers still wrestle with the push/pull of nature, and the call of the wild. I hope, immodestly, that the work I am doing now fits somehow within that tradition.
codex canadensis embroidery nature philosophy