Appearances to the Contrary... 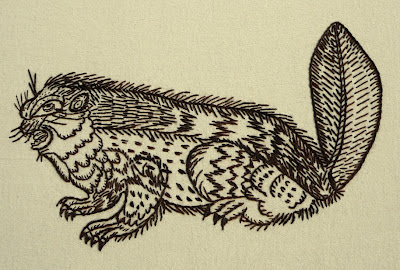 ...this is not a beaver. Louis Nicolas describes this critter as "The mountain rat, as large as a spaniel." Unfortunately, the accompanying Histoire Naturelle does not give any more information. Pere Nicolas does illustrate a beaver on another page, and gives a lengthy verbal description. Since the mountain rat is included with the aquatic mammals, I'd say our mystery animal is probably a mash-up of a muskrat and a beaver, concocted in Louis' fevered imagination. 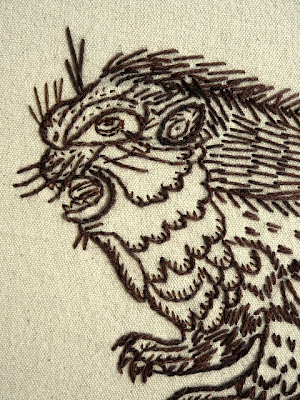 Look at the small sharp teeth, which are indeed quite rat-like. But that tail could only be a beaver's.

The plot thickens, however, when I recall a creature that was rumoured to inhabit Little Mountain, near where I grew up in the Fraser Valley of British Columbia. That animal was called a mountain rat, and said to be the size of a beaver. From the same legend, you might think, except that Little Mountain is several thousand miles from the parts of Canada that Pere Nicolas was exploring.

While we contemplate that little mystery, here's a shot of what the whole cloth looks like so far. Now that I've completed the five larger animals of the piece, I have a smaller quail, duck, fox, and wolf to embroider in the edge sections, and then I will link them all together with a swirling vine pattern. 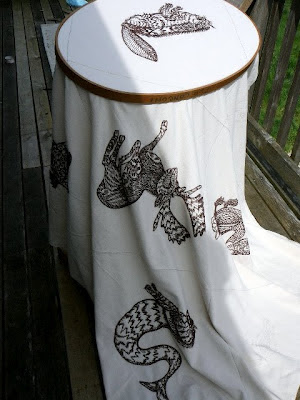