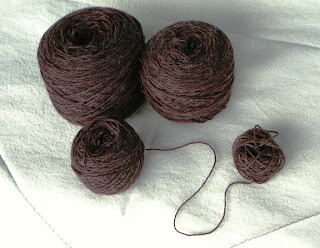 Here's what the dyed yarn looks like, sort of, depending on your monitor. Let's say a chocolate-y brown. 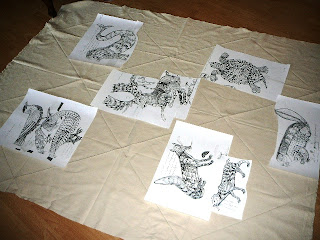 I laid out my photocopies on the scaffolding (underlying structure of the design). In addition to pressing the folds of the layout grid, I machine basted over the lines so that I could see them more clearly. Later, I will replace the lines with a leafy, swirly pattern. 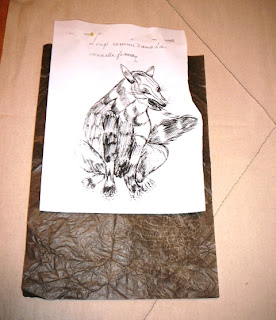 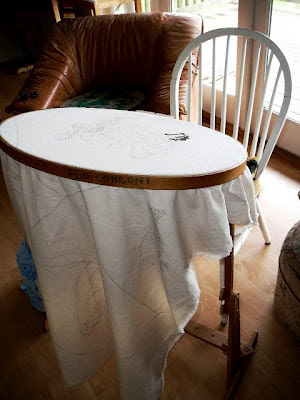 I scored a great embroidery frame on a stand at the local thrift shop. Bless Flo Conconi, the apparent previous owner. (Her name is on the outer hoop.) Believe it or not, I don't usually use a hoop, but this setup allows me to use both hands in tandem, so the stitching goes faster. And I don't have the weight of all that cloth in my lap. 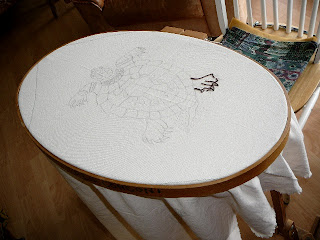 Beginning work on the turtle. 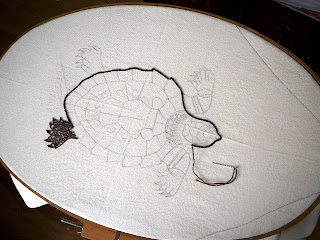 The yarn/thread is quite different to work than embroidery floss. It is thicker, and so creates more shadow, making the line appear heavier than it is. I was planning to use mostly chain stitch, but switched to split stitch after the initial outline. 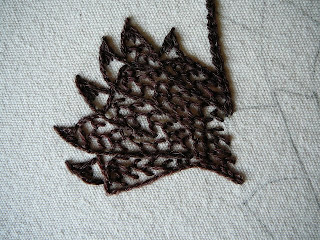 I used featherstitch for the scales on the foot. I can see my approach changing as I learn how the thread interacts with the cloth and design. I am working with a different medium than pen and ink, so obviously I can't do an exact replica. I like this - my interpretation of the original will be bolder, less detailed, more graphic and textural. This fits - at the time the original drawing was made, there weren't cameras, and it was rare to draw from life. Instead, an artist would refer to books of engraved images and copy them, modifying as necessary. So I am copying a drawing that was a copy of an engraving. Each generation is unique, depending on the medium and the hand of the artist. 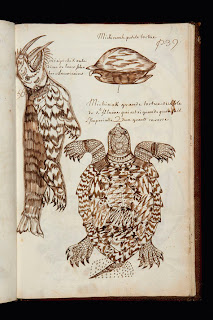 Louis Nicholas didn't have a lot of drawing skill, but that's what gives his work such charm. Some of the more fantastical creatures were probably drawn from verbal description, with Nicholas cobbling things together the best he could. The text that accompanies the drawings, A Natural History of the New World, shows that he was passionate about documenting everything he encountered in strange and wonderful North America.
Images of pages from the Codex Canadensis are from the Library and Archives of Canada website.
codex canadensis embroidery