I Have to Laugh, Otherwise I'd Be Weeping... 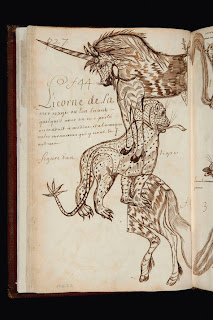 I've been reading the Natural History of the New World, attributed to Louis Nicolas, creator of the Codex. It is surprisingly hilarious! Who would have expected comedy from such an attempt at authority? (But perhaps that is a natural source of comedy, or at least tragi-comedy.) Rowan Atkinson would be the perfect choice to play the role of Louis Nicolas in the film version, if there was one. Imagine a pompous, know-it-all young priest, arguing passionately for the existence of unicorns. He misquotes Latin phrases with aplomb, although the resulting meaning is often quite opposite to what he intends. He describes a buffalo very accurately, yet illustrates it with a drawing of an ox.

But his language is beautifully poetic, (or at least the translation by Nancy Senior is) even if much of what he says is misinformed. The subtitle of the book is "The Faithful Search for Everything Rare", a lovely phrase which captures the odd combination of missionary fervour and fascination with the exotic that Nicolas brings to these pages.

There is even some interesting information about the use of moose hair and porcupine quills in embroidery and weaving. Nicolas is very impressed with the indigenous people's skill in creating beautiful objects with the most basic of materials.

His descriptions of the First Nation people he encountered are mostly respectful, even admiring. He does condescend at times, though, calling them foreigners, showing how firmly his own feet are rooted in French soil. And many of his commentaries about animals, birds and fish are based on the economic or trade value they might have, which is not surprising since that is the classic view of the colonist. This is where my laughter turns to tears.

The view of North America as a land of such abundance that it can be exploited endlessly for its riches persists to this day. The caribou that he describes as thriving in the northern lands, have been reduced in numbers to such an extent that last week, the Canadian government announced plans to do a count of the remaining herds. We all know the story of how the buffalo, which once roamed the prairies in vast numbers, became almost extinct within a generation. Nicolas recounts merrily how easy it is to kill 100 or more passenger pigeons with one blast of a shotgun, and that one could even shoot them from the window of a Montreal home as they passed through in flocks of such numbers that the sky would be full for days.

The chapter on the buffalo ends with a (probably unintentional) commentary on the acquisitive greed of the colonizing forces. Nicolas describes how the aboriginal people are:


"attached to nothing but living from day to day, without attempting to amass anything, or leave anything to their wives or children. Consequently, they are never seen to quarrel, nor to plead for goods whose advantages they do not seek, as do civilized nations whose self-interest gnaws them to the marrow, in a manner about which I have nothing to say, as everybody knows it all too well, particularly the poor, who groan under the violent oppression all around them."

He wrote this in about 1701. I guess somethings never change.

Images of pages from the Codex Canadensis are from the Library and Archives of Canada website.
codex canadensis consumerism nature