Have I Passed This Way Before? 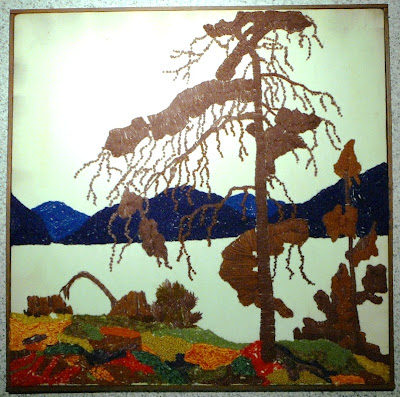 The above image is of a piece that I did back when I was in high school - probably circa 1975. I remember I worked from a postage stamp of Tom Thomson's famous painting of a battered pine tree. 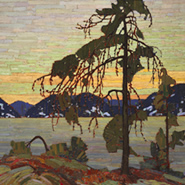 The embroidery had been sitting in my Mom's basement for the last thirty years, and when she came across it last fall gave it to me in case I might want to do something with it. It was kind of appalling and fascinating at the same time to re-encounter something I had made so long ago. It was faded, stained and the moths had been at it, but I thought I would take it off its stretcher and see if I could refurbish it. Ah, it was not to be. The rust stains not only didn't wash out, they spread. I wasn't particularly attached to the piece, so I just threw it out.

I did take a couple of badly lit  photos before it went, though, and I share them with you now as evidence that I have come full circle. Once again, I find myself working with archetypal Canadian images, and I am using wool on canvas in a painterly way. 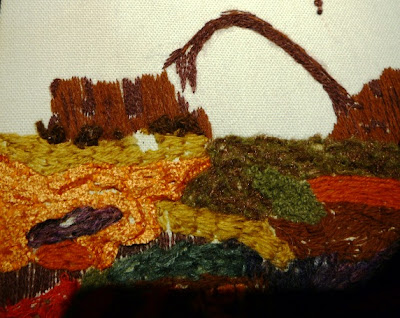 I think that my skills have improved over the intervening thirty-seven years. I have learned a few things about design, concept and technical processes. I can't help but wonder if I wouldn't have had a more successful career if I had just stuck with textiles from the beginning, instead of roaming off in all directions.  But I have come back to the path, and hopefully the knowledge and experience I have gained in all my travels will add a depth and resonance to the work I do now.
embroidery