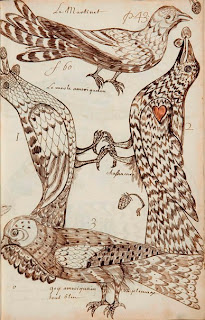 The Codex Canadensis project has been brewing away in the back of my brain since I first posted about it a month ago. Thanks for your comments: they did help me decide to go ahead. Slowly, and small(ish) to start.

First, the materials. Authentic reproduction Jacobean embroidery seems to require heavy linen twill. However, 80 bucks a meter is not in the budget, so I have gone for an unbleached 7 1/2 ounce cotton duck, which is available at the wonderful island store Stitches, so I can get more if I need it.

Finding thread was not so easy. Traditional crewel wool is not locally carried, nor could they order it. After a couple of visits to Stitches, nothing suitable leapt to view, so I decided to just get white wool and dye it. It's Berroco Ultra Alpaca, hardly traditional, but the price was right and the yarn promises to give the matte effect I am after.I dyed it in absolutely the most haphazard way. After pre-soaking the skeins in low immersion warm water with a couple of cups of vinegar in it, I sprinkled DRY and VERY OLD brown Procion MX dye powder on the yarn hoping for an uneven colour strike with bits of red, blue and yellow livening up the brown. What happened just goes to show the latitude possible in dyeing: I got a very even solid brown, in spite of random stirring and no salt for leveling. It's fine, looks like sepia or walnut ink, which is what I wanted. I would have been happier with more variation in colour, but it will be fine.

Design ideas have also been percolating. Rather than strict reproductions of the Codex drawings, I have decided to go with a Jacobean "Tree of Life" type of design. The animals will lurk in the foliage of undulating vines, basically, although I considered a number of ways that could be configured. Several afternoons of very interesting but unproductive consulting of reference books on pattern and crewelwork later, I settled on an ogee-like layout wherein the vines curve round a diamond shaped lattice, with the animals, birds and fish in the spaces between.

I was very drawn to one option which offered the freedom of simply embroidering the critters individually, then applying them to a larger cloth. Making "slips", as the pieces are called, would lessen the pressure of having to have the design figured out before I began, and make it much easier to correct mistakes, as well as not having to lug the whole two meters of cloth around. Somehow it seems important to me to have the cloth be of a whole, though, so I am going for one complete piece. Hope I don't regret it too much!

I laid out the lattice on the cloth by folding and ironing the lines, rather than marking with a pencil. This might not be quite as accurate, but is fast and I don't have the space or a long enough straight edge to mark the lines anyway. I then threadbasted along the folded  lines. I photocopied the pages of the Codex at 200%, which is kind of arbitrary, and I may fiddle with individual size a bit, but will stay with the fantastical lack of proportion between the birds and larger mammals as they appear in the original.

Now I will trace the outlines of the animals onto the cloth, using dressmaker's carbon. I could use artist's graphite transfer paper too, I'll see what works best. Then the stitching can begin!

Images of pages from the Codex Canadensis are from the Library and Archives of Canada website.
codex canadensis dyeing embroidery