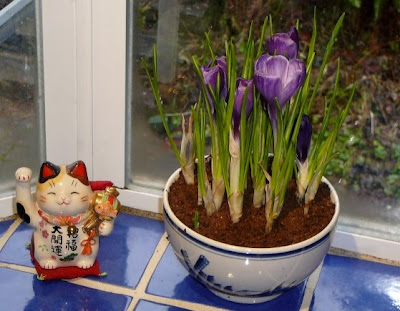 What every January in the Pacific Northwest needs: crocuses on the windowsill. A friend gave me the bowl of bulbs in November, I moistened the soil and kept them in a dark place 'til just before Christmas, when they looked like pale fingers pushing through the soil. I thought they were paperwhites, so was surprised and happy to see simple crocuses. And Mani-Neko is happy too, I think.

I have been pondering on a project. Ever since seeing the amazing drawings in the recently published Codex Canadensis, I have been wanting to render the images in thread. One thought led to another, and possibly since I was simultaneously reading Joan Edwards's book on Crewel Embroidery, it seemed perfectly logical to put 17th C. embroidery techniques together with 17th C. drawing, and to create large panels similar to 17th C. bed curtains. Bed curtains of that time were often worked in crewel-stitched tree of life motifs, and the Codex is a collection of the flora, fauna and peoples present in Eastern Canada when the European missionaries arrived, something similar to a tree of life itself.

There's lots more going on conceptually, and I think it could be a fabulously exciting piece, but I have had to get a hold of myself and think about the sheer logistics involved. It would probably take a couple of years to complete, working on it every day. Because of my back and hands, I could probably only work on it about four hours a day total, and it would be the only project going, with any of my other interests falling by the wayside. Could I keep up my interest and energy for that long?

And then there's the whole issue of what I would do with the finished work. I think it's a natural for exhibition in the public gallery realm, but I have been out of the trend-conscious straight art world for such a while now I really can't be sure. I used to get grants and exhibit professionally, but since my accident I thought I had left that world behind. I don't know that it's possible to re-enter that easily - it looks as though I didn't take my career seriously, whereas I think what happened was a shifting of priorities.

In any case, it's not like I have room in my house for a set of 17th C. bed curtains. Most of the art I have produced over the years is either sold, or left behind in the attics and basements of places I have lived. I have even been known to dumpster artwork. (Somehow what I trashed always seemed to be removed before the garbage collectors came. I smile to think there might be people out there who have rescued or re-purposed my work, and may be enjoying it in one way or another to this day.)

But maybe I am just getting ahead of myself. When I create a new piece I usually can "see" it complete in my mind's eye, and most of the process is simply production. I don't usually change a piece much as I go, although I have been trying to loosen up in that regard. Perhaps I should start with a sample to see what happens. How can I resist an image like this one? 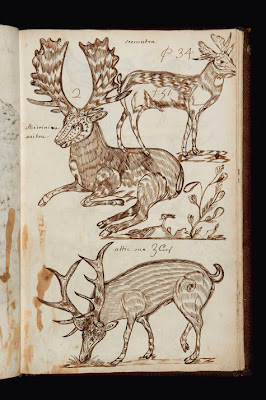