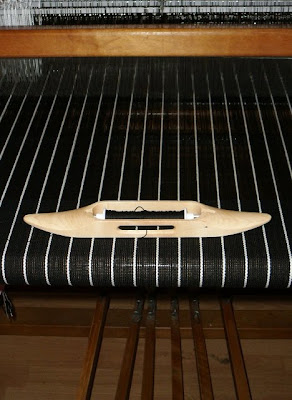 I finally got the beast of a warp onto the loom and am now at the satisfying, soothing stage of weaving it off. I couldn't believe how difficult it was to thread and wind on, but given that it has been 15 years since I was last weaving seriously, and even then I never used such a fine yarn (16/2) and so many ends (614), I guess I should have known. But I probably wouldn't have started it if I HAD known, so I'll just consider it an exercise in patience and give myself a gold star.

It is to be a traditional butcher's apron for my sweetie. He could buy a perfectly serviceable one from a chef's supplier for under $20, but this is a slow cloth for a slow foodie. It has already taken me about 20 hours to wind the warp and dress the loom, and will take about the same length of time to weave off the six yards of cloth. I at least had the presence of mind to wind enough warp for two aprons, thereby getting two for the time of one.

But working with black thread at this dark, gloomy time of year is a real challenge. It's hard to see with the middle-aged eyes. Happily, next month I am signed up for a weaving workshop with Jane Stafford that focuses on colour and design, so I hope to get a good fill of bright colour then. 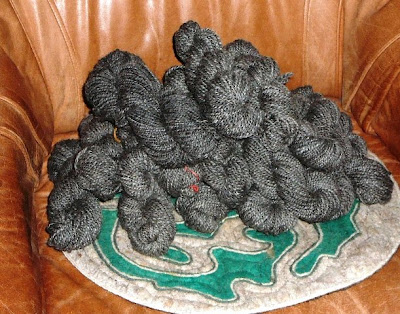 Meanwhile, the pile of grey yarn is growing. I figure it takes about 2 hours for each skein, from fleece to finished yarn. I have sixteen skeins now, and will probably need another sixteen. Too late, I remembered Stephanie complaining about knitting for a big man in one of her Yarn Harlot postings. Wish that had come to mind before I decided to knit a sweater for the chef! It will probably take over 100 hours of spinning and knitting - good thing that's what I like to do.

And, thinking about the endless hours of repetitive handwork and how soothing and centering it is for me, I realize I would probably be stark raving mad if I didn't have the textile arts in my life. Not only are they therapeutic, I have something to show for it at the end. Positive all round!
knitting spinning weaving