Happy New Year, Every One! 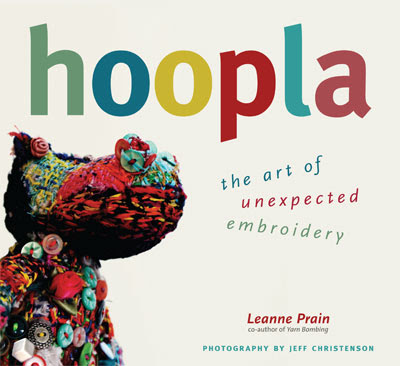 I make a habit of cleaning the house on December 31 so that I don't drag my dust from the past year into the new one. In that spirit I offer the following opinion, recognising that while nobody wants to end 2011 on a sour note, it's better than carrying it into shiny, fresh 2012.

I should preface this admittedly cranky review of Hoopla: The Art of Unexpected Embroidery with a couple of comments. First, I paid full cover price for this book, at my wonderful local independent bookstore, Watermark. I am glad I did, since I believe it means a few more dollars stay in my community. Second, I could have been in this book. So could you, if you had seen the posting asking for submissions. I didn't send anything in, because I don't believe self-selected collections of unpaid artists are a valid indicator of what's out there, and I think artists should be paid for their work if we have any hope of being taken seriously, either by ourselves or others.

On the other hand, Hoopla contains the work of several artists who I know and respect. The brilliant Betsy Greer contributed the foreword. Sherri Lynn Wood is featured, as is Jenny Hart. Although I have never met Ray Materson, either in person or on-line, I have been in awe of both his story and his talent for several years. I have great admiration for the work of Penny Nickels and Alexandra Walters. That they are included here gives the book more legitimacy that I think it deserves.

Sad to say, Hoopla falls short for me on several fronts. Maybe author Leanne Prain tried to cover too much, or maybe her publisher didn't give her the editing or design support she needed. My biggest criticism is of the how-to section. God help anyone trying to learn to stitch from these instructions. The diagrams are confusing and in several cases, just plain wrong. ( And I'm not talking about an alternative way of making the stitch, either. Couching, chain stitch and French knots are all screwy here.) There is no excuse for this since so many clear, accurate instructions are available, on line and in print. Prain states more than once that embroidery skills are passed on orally, but her verbal instructions are not any clearer than the diagrams. (I don't know where she got the idea that embroidery is learned through oral tradition, since pretty much everyone I know learned it visually, by being shown.)

The design of the book causes some frustration as well. There are numerous sidebars, some with useful information, some not. For example, there is a sidebar that helpfully lists some possible containers for your embroidery project: an old eyeglass case, a 1950's ceramic planter, a cigar box, a typewriter case, a coffee tin. (Huh? If you can't think of something practical to store your project in, this list is not going to help.) Then, in another sidebar, buried in a list of six other hints, is some of the most valuable information for a new embroiderer: to separate your strands of floss and recombine them in the number desired before threading your needle. I believe this technique is commonly known as stripping the thread, although Prain doesn't use that term here.

A full page is given to a warning not to lick the end of your thread to point it for insertion into the needle's eye, lest the moisture cause your needle to rust. Funny, I lick my thread all the time, and have never had a rusty needle. There is a great deal of mystifying information on transferring patterns to cloth, involving needless steps (ie. "Trim your pattern to 1/4" from the edge so you have something to hold onto." Huh? A quarter of an inch is not much to hold onto, why make it hard for yourself?) There is not a lot of discussion about thread, but vintage thread and floss are suggested without the caveat that cotton becomes brittle and dry over time. Depending on how "vintage" your thread is, you could be facing a lot of grief with breakage and tangling.

Odd bits of instruction abound. Prain advises that stitches be no longer than 1/4" when doing satin stitch, otherwise the shiny, smooth effect will be lost. She says cross stitch is always best worked on Aida cloth. A project of counted cross stitch is called needlepoint. Securing your thread on the back of the work isn't necessary because the stitches will stay in place on their own. (!)

The photographs are of an uneven quality and often more attention seems to have been given to the settings and photo styling than clear details of the stitches. Overall, the look of the book is cute, fun, and (they tell me) hip, so it may be that I am just out of touch. (Which reminds me of a woman my age I saw yesterday with a button that read "I may be too old to understand your music... but that doesn't mean it doesn't suck!" pinned to her very cool, vintage black leather motorcycle jacket. But I digress...)

Although I confess to not reading every word, what I did read revealed many typos and formatting inconsistencies, which are more the publisher's responsibility than the author's. It's frustrating and sad to see contemporary embroidery, a field so close to my heart, not given the care and respect it deserves. Obviously, the intention here was for a popularization of innovative embroidery, and a debunking of the idea that needlework is all quaint hearts and flowers, but, excuse me, The Subversive Stitch came out in 1989, and artists like Hannah Hoch, Sonia Delauney and Sophie Tauber-Arp were making textile art that challenged notions of gender roles back in the early 20th century.

There are quite a few projects featured here, none of which I would ever make. There is no bibliography, although there is one page of nine (count 'em) website listings . For all its claims to inspire innovative stitching, I don't think Hoopla is going to be regarded in years to come as the definitive volume of the current generation of stitching in the same way Therese de Dillmont's Encyclopedia of Needlework or Erica Wilson's Embroidery Book or Mary Thomas's Embroidery Book were for their respective eras. However, many of the artists included are very worthy of attention, and their own words are probably the most inspiring aspect of the whole book.

I recommend checking Hoopla out very carefully before purchasing it - that is, unless you are feeling flush and want to contribute a few dollars to your local economy.
book reviews embroidery