Shifu or Not Shifu? 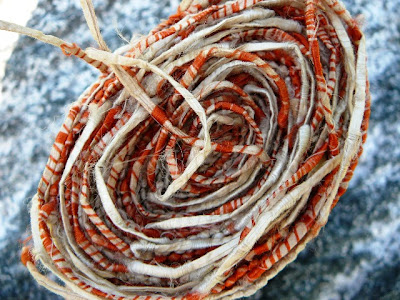 As promised, pictures of a vintage obi woven with what I was told was shifu. But a closer examination of the tails on the edge tells a somewhat different story. It is paper but hardly twisted. What is really interesting is how it is plied with silk, both a rich orange colour, and a light cream. The silk sits almost at a 90 degree angle to the paper, which results in a subtle but intriguing effect when woven. 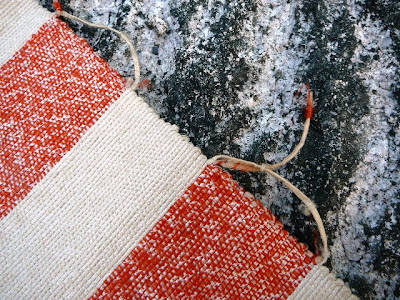 This had me confused initially. The cross-wise coloured ply on the weft makes it look like part of the warp at first glance. But if the coloured thread was the warp, how could the solid stripes be solid?

Indeed, the warp is the same light cream as the light weft. And the orange stripes aren't really solid, but tweedy. 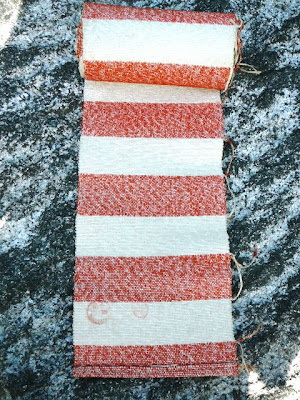 Very clever. What I first took as simply a piece of rough weaving is much more sophisticated than I thought. And until I had spun shifu myself, I probably would never have caught on. There's the value of hands on experience in a nutshell. 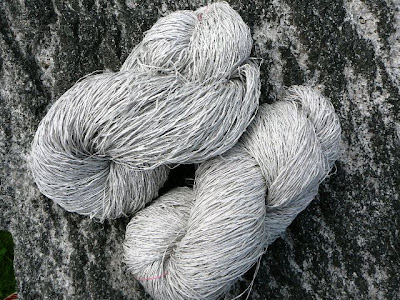 I also had a closer look at a couple of skeins of yarn that my friend Jean-Pierre sent me from Japan. They have the dry crunchiness of paper, but J.-P. tells me that they are silk. 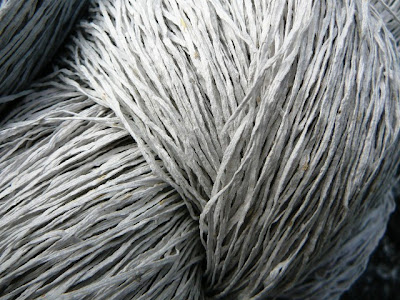 A burn test confirmed the fibre as silk. Looking more closely at the structure of the yarn, though, showed no individual filaments of fibre. Instead, it seemed to be mushed together like felt. Perhaps it was made from silk paper?

I'll have to get out my magnifying glass and look for more clues. I love a textile mystery!
Japanese cloth spinning weaving