Back to the Fibreshed

on July 06, 2011
There is a lovely article by Rebecca Burgess over at Fibershed. Beautiful pictures and the story of the alpacas of Renaissance Ridge in Northern California. 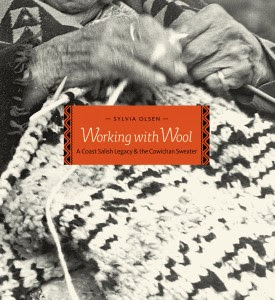 It reminded me of a book that I finally bought: Working with Wool by Sylvia Olsen. Subtitled "A Coast Salish Legacy and the Cowichan Sweater", it genuinely breaks some new ground in the documentation of the most distinctive garment from my own region. I had hesitated when it first came out, as I already own the books by Priscilla Gibson-Roberts and Marg Meikle, thinking "Who needs another book, however interesting and well-intentioned, by a person from outside that culture?" Olsen, however, married into the Coast Salish nation at nineteen, and lived and worked with the knitters of Cowichan sweaters for thirty years. She avoids most of the romanticizing that Europeans often bring to the subject, and allows the voices of the Coast Salish knitters to tell their own stories.

There are no patterns here, which pleases me. I know I'm being knee-jerk politically correct here, but really, if it's not knit by a Coast Salish person, then it's not a real Cowichan sweater. After many years of fighting the marketers of inferior knock-offs, the Coast Salish have won the legal right to the exclusive use of the label "Cowichan". How sensitive they are to this issue arose a couple of years ago in connection to the sweaters marketed by the organizers of the 2010 Winter Olympics. If you want to make your own version, the Gibson-Roberts book gives all the details, but why not just save up and support the knitters by buying an authentic one? But maybe I am just being pedantic.

Blending her own experiences working with knitters and sweaters from the late ‘70s to the early ‘90s, her desire to learn as much as possible about how government and business intersected with knitters and purchasers, the stories of the knitters themselves, and more than a hundred archival photographs, Olsen has woven a fascinating narrative, a cross cultural story that involves all British Columbians, First Nations, settlers, governments, and churches. “We have all been touched by, or involved with the sweaters in one way or another,” she says.

Jean at One Small Stitch has an interesting post on Peruvian mummy dolls, which is very relevant to this discussion. Sometimes it does take a caring, educated person from another culture to ensure that traditional ethnic techniques are preserved.
book reviews knitting