Picking Up the Needle Again 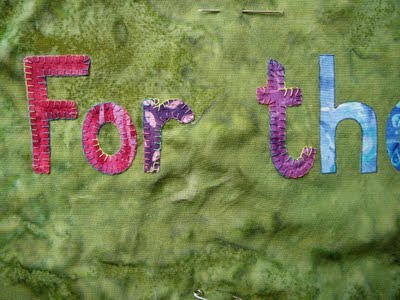 Remember the fabulous hippy-dippy quilt I was working on a few months back? The reason you never saw any pictures of the completed work was that it took a conceptual U-turn when my friendship with the intended recipient ended quite abruptly.

I was faced with what I saw as an ethical dilemma. I had basically finished the centre panel of the quilt, and intended to border it with blocks depicting scenes from the life of the person it was for. Even though I had put a great deal of effort and planning into the images, and I was encouraged by some friends to go ahead and finish it anyway, it didn't seem right to do such personal work when my heart was in a completely different place.

So I scrapped the story images, but kept the corner pieces depicting the directional winds. The quilt now seemed more about place rather than a person. I was reminded of a favourite quote from Canadian poet Alden Nowlan by Bascom Hogue's blog. "For those who belong nowhere, and for those who belong to one place too much to belong anywhere else." I have always felt that these words applied perfectly to the little island where I live.

So, typically, I have made things exponentially more time-consuming for myself. After laying out the text in a single line that will travel up the left side, across the top, down the right side, and across the bottom, I considered some form of applique. I decided I wanted to bring more colour to the green border, and to echo the rainbow in the centre, so I bought a pack of rainbow coloured batik cottons. I then set about drawing out the letters, tracing them in reverse on Steam-A-Seam Lite fusible web, applying each letter in sequence on a different colour, cutting the letters, arranging them and fusing them in place.

But I have little faith in the longevity of fusible web, so have now begun working a little blanket stitch around each one inch wide letter. Yeah. I hope to be finished by June 30. Uh huh.

I just know it will be incredible when it's done. In oh so many ways.
quilting