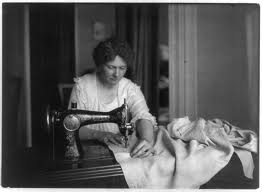 I have been reading Ruth Brandon's A Capitalist Romance, about Isaac Singer and the sewing machine. Who knew that there was such a fascinating story behind the man who created the modern sewing machine? I didn't!

But wait, you say, didn't Elias Howe invent the sewing machine? Yes, he did, and so did a few other people. Howe remains the sole creator of the needle with a tip at the point, a crucial and indisputably unique feature of the modern machine. But Isaac Singer was the bombastic and charismatic figure who truly popularized the sewing machine.

Brandon's book ends with the wonderful, apocryphal story of the machine's invention told by dancer Isadora Duncan (who was involved with Paris Singer, Isaac's son):

The old man had a dream in which a rider on a horse was rushing at him with a spear in his hand. The spear had a hole at its point, threaded with a yellow ribbon, which waved in the wind. The problem was solved: the hole for the thread had to be changed to the point-end of the needle.

Seems that Isadora had got it wrong, albeit with her characteristic flair for the dramatic. Elias Howe is credited with a similar dream:

Where Red Indians were firing arrows through cloth wigwams snagging threads with the tips of the arrows. Elias woke in the middle of the dream, rushed to his workshop and put his dream into practise.

From Alex Askaroff's biography of Howe.

Who knows? Maybe Howe really did have such a (culturally questionable) dream. Both Singer and Howe sought to free the legions of hand sewers and tailors from oppressively long hours of labour and often terrible working conditions. Both would have wholeheartedly endorsed capitalism as the means to making the world a better place. (Which is a whole other debate that I will sidestep here.) I wonder what they would think of the third world sweatshops which exist today as the end result of their invention and ideology?

Maybe that is a simple-minded question on my part, but I can't help but think that great, inventive minds are needed to address not only the technology of a machine, but the social, cultural and ethical implications that come with each new device. This is a vast topic that my wee blog can't hope to explore fully - good grief, I'm still in the 19th century with sewing machines. Don't let me near an Itouch.
sewing