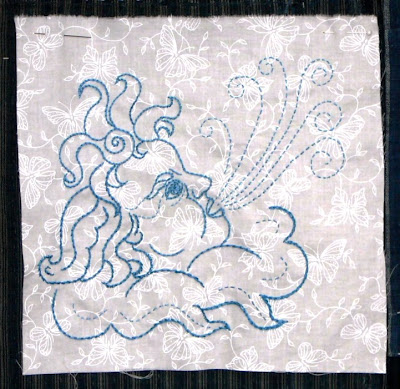 Have you ever been so excited about beginning a project that you stay up way past your bedtime, sewing into the wee hours? That happened to me last night - I so much wanted to see my first block finished.

This quilt is in honour of a very special father and daughter, Sam and Skye, and in celebration of Sam's fortieth year in Canada. He was a single parent, and raised an intelligent, beautiful and capable girl, all on a remote little island. Her drawing (done as a teenager) was the actual starting point for the quilt, and will be the centre portion. 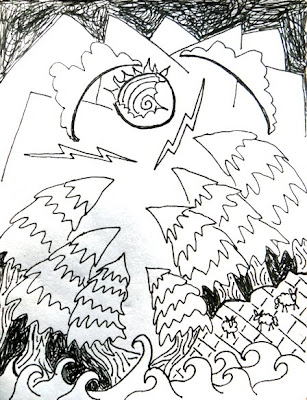 I am planning on using a combination of applique and embroidery for this panel - part of why I asked the question a few posts back about the mystery applique technique.

The outer portion of the quilt will be Sam's story, which is almost an archetype of the time and place in which he lived - coming to Canada from the U.S. in 1970, living off the land, experiencing adventure, adversity and love. The first block is one of four - representing the heavenly winds of cosmic power and vital spirit. Each block is a little different, and will be placed on the four corners of the quilt. They are guardians and guides. The first one, pictured above, is Southwest.

The faces are based on a very old map of the world, that personified the various winds as well as unknown territory. When one begins a journey, it is helpful to have a map!

I began stitching with split stitch and four strands of DMC floss, and hated the way it looked. It was slow going too, as the thread obscured the line I was trying to follow. I switched to stem stitch with three strands, and liked that better, although getting a smooth line on inside curves still eludes me. I sense there is a sweet spot between stitch length and angle of curve - one day I'll find it. Running stitch is a no-brainer for the breath of wind.

One last observation from my stitching marathon - I usually strip the thread, which is separating all six strands in a length of floss and then combining them in the number desired, using the fingers to smooth and release tension from the thread. (Nataline Chanin calls this "loving the thread.") A couple of times I lazily just used three strands in a bunch straight from the skein, and I could feel the difference as the thread moved through the cloth. It felt a little rougher, and the individual strands didn't lie as smoothly on the surface of the fabric. Small point, to be sure, but revealing as to the sensitivity of touch and the way thread reflects light.

I can't wait to begin the next square. It will be a long process, as I plan twenty border squares, plus the large centre panel. My goal is to be done in time for Artsfest on Canada Day weekend (that's July 1, 2011).
embroidery quilting