Do Not Toy With the Hearts of Men 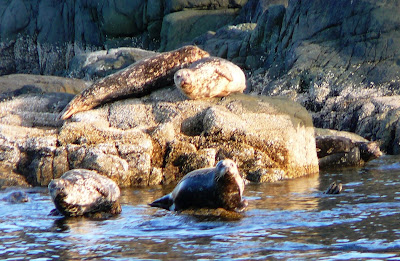 "The Heart of Stone"

Look,
this was
the heart of a siren.

Helplessly hard
she came to the shores
to comb her hair and
play a game of cards.

Swearing and spitting
among the seaweed.
She was the image herself
of those hellish barmaids
that in stories murdered
the weary traveler.

She killed her lovers
and danced in the waves.

And so,
time passed in the wicked life of the siren
until her fierce lover, the sailor
pursued her with harpoon and guitar
through all the seafoam,
farther than the most distant archipelagoes,
and when she reclined in his arms,
the sailor gave her his beveled point,
a final kiss,
and a justified death.

Then from the ship
the dead commanders descended,
beheaded by that treacherous siren,
and with cutlass,
sword,
fork and knife,
pulled that heart of stone out of her chest,
and,
near the sea,
it was allowed to anchor,
in order that it could teach the little sirens
to learn to behave properly
with the enamoured sailors.

Neruda was talking about the ocean, I think, but nevertheless I have always taken this poem under advisement. That sense of it being a personal warning for me not to be careless in my love life came back to me last night.

It was a very disconcerting experience. A few days ago, at the Free Store, I picked up a copy of a book by a writer I had known back in Toronto, thirty years ago. Last night, I opened it up, read a few paragraphs, then randomly skipped a few pages ahead and read...about me. Actually me. Not just someone I identified with. This guy and I had had one-and-a half dates back in 1979, and I "spurned his advances". Not very gracefully it would seem from his re-telling of events.

Apparently he kept a diary. Can you imagine coming across an old boyfriend's diary, and reading about his desire for you? (Given how everything turned out, it was a good thing I never slept with him.) Certainly makes me think twice about the personal stuff I have put in this blog. Even though names may be changed to protect the innocent (or guilty).

Anyway, I hope I have learned a few things over the intervening years. But a reminder to treat other people with kindness, honesty and integrity never hurts.
my story