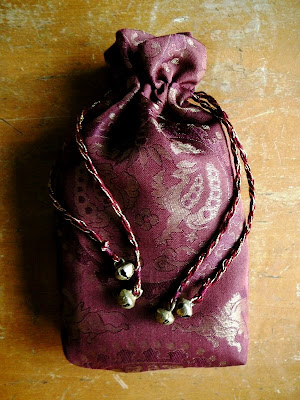 Sophia, an artist on the island, approached me with the idea of making a new bag for her tarot cards. The necessity she had was that it be made of silk. I said yes, of course. I have masses of silk scraps, mostly Japanese, that need a worthy home. Also, I understand the metaphorical and spiritual capacities of cloth, and the opportunity to make something so special for Sophia, who channels a great deal of spiritual energy to our community, was an honour.

Sophia was drawn to a very old piece of silk brocade, that although it came from Japan looks rather more Chinese. It had already been through a few incarnations, as the lines of wear at old seams and some new seams in different places would indicate. The piece was probably part of the front band of a kimono, which I guess because of the narrow width (about 19 cms.) The images on the brocade include phoenixes, winged horses, roses, and clouds.

I had a piece of silk charmeuse in a similar deep burgundy colour. I used it to make a simple 55cm square scarf to wrap the deck in, and to lay out the cards on. I made little tassels from some vintage embroidery thread in the same colour - see how all those bits and bobs in the stash find their true home? The tassels protect the corners. Tassels are accorded protective powers in many cultures, often placed on vulnerable entry points, ie the back of the neck, the head, or the corners of bridal cloths or baby blankets. 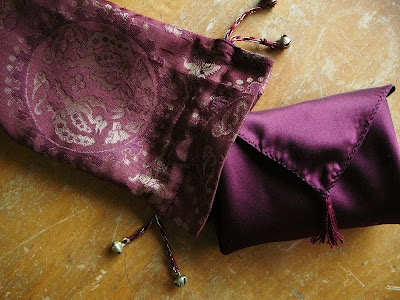 I made a simple drawstring bag, similar to the bags used for tea ceremony utensils. It took much longer to figure out than anyone would have guessed. The strip of cloth had already been cut once and resewn in a different configuration, probably to reduce wear, so I rejoined it in the original manner. Once I had a piece of whole cloth, I wasn't going to cut it again, so I ended up deciding to use the continous piece to form the bag, even though that meant the one way design was going to be upside down on one side. The lining is a piece of the same burgundy silk charmeuse, so to reach inside feels soft, luxurious, and sensual.

I made drawstrings out of more vintage embroidery floss and a strand of gold thread. I plied it on my spinning wheel, and cabled it back on itself to form the right thickness. I added small brass bells from India as further protection, and, since Sophia also is a musician, to add the component of sound to the bag.

Since I was now on a bit of a roll with the senses of sight, sound, and touch covered, I put a few drops of essential rose oil on a card of handmade mulberry paper and tucked it inside to scent the bag. Sophia might like to add a small chocolate heart for the aspect of taste, but I'll leave it up to her how far she wants to go with the sensory stuff.

I hand sewed the sides of the bag with silk thread, and voila!

In exchange, I will receive a reading. I have never had a Tarot reading before so am looking forward to the experience.
island life Japanese cloth secret life of objects