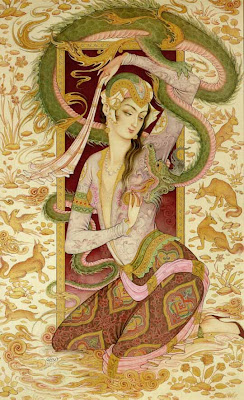 (This is a continuation of the story previously posted here and here.)

Time passed, as it does. The love between the girl and the knight was abiding and withstood the first few storms of winter.

But what the girl did not know was that, long ago, the knight's soul had been pierced by a poisoned arrow. She did not recognize the signs of his inner pain until it was too late. She loved him so much that she even joined him in his feverish belief the poison wasn't there, and that any symptoms he showed were her own doing. The girl ignored the warnings in her heart and tried to make life as comfortable as possible for the anguished knight.

The day came when the strange sickness caused by the poison of long ago erupted like a dragon from within him. He was no longer able to speak any true words, and the arms which once held the girl so lovingly flailed out in terror. His love for the girl drained out of him, and he was consumed by the dragon's fury.

The girl laid her knight to rest on the shores of the magical island. She wept and wept, but slowly, gently, the creatures of the woodlands came to console her, and the birds flew over her, lifting her heart with their song. A jasmine bloomed in the depth of winter and offered her its sweet perfume. The boughs of the trees brushed away her tears, and the waves of the ocean carried away her sorrow.

Her heart remained full, tender, and undiminished.
my story