It All Began in Tantallon, SK 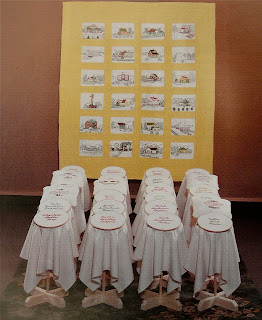 In 1993 I was asked by the curator of Regina's Dunlop Gallery to enter into a collaborative relationship with a quilt from their permanent collection. The quilt had been made 55 years earlier by the women of the tiny town of Tantallon, located in southeast Saskatchewan. It was a charming piece, each square delightfully embroidered with a rendering of the maker's home or one of the notable buildings in the town. It had been presented to the wife of a departing church minister, and apparently never used, but stored carefully in a trunk before donation to the gallery.

It had been made by the Tantallon Homemakers Club. All the documentation the gallery had was a partial list of the makers. Mrs. George Ormiston. Mrs. Fred Brown. Mrs. Paynter. There was a contact number for one of the women's daughters. And that was it. 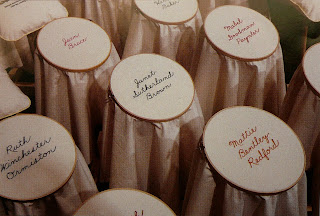 The story goes on - I did lots of research to discover the full names of the makers, culminating in a gallery exhibition featuring the Tantallon quilt and my own creative response to it. The show was reviewed and received a fair bit of attention from the media. An article about it was published in The Craft Factor magazine and re-printed in Craft, Perception and Practice, Volume II.

What was incredible to me was that on the day of the opening, a bitterly cold prairie winter day, carloads of the descendants of the Homemakers traveled for two or three hours to come see the quilt. People wanted to have their picture taken with it; buttonholed me to tell me stories of their mother or their aunt who had worked on it; reminisced about the town and the old buildings that were no longer standing, but preserved in the pastel threads of the quilt. It was clear that this quilt was very meaningful to these people, but it also garnered a powerful response from people of 12 other Saskatchewan towns to which the exhibition eventually toured.

The story contained in the quilt, and my contribution of honouring the makers by "signing" it, evoked many emotions and memories of a period in history which was only half a century past. Still, given a few more years of languishing in an acid-free tissue lined drawer in a temperature and humidity controlled room, and that quilt could have been totally cut off from the people who made it and the community that had fostered it. It would have been simply a charming artifact of simpler times.

All of this is a rather long winded introduction to my current project. I have been asked to participate in making a quilt honouring one of this island's matriarchs who has just celebrated her 80th birthday. Many of the women (and one man) of this community have contributed a square, either embroidered or pieced, with an image that connects them to Pat. As Pat has lived here all her life, this quilt is also a history of this place.

I'm not going to let what almost happened to the Tantallon quilt happen to this one. I will be assiduously documenting each aspect of the making of this quilt and the people involved. What I hope will emerge will be a story in cloth and a story in words of a very unique, eccentric and beautiful island perched on the north west edge of North America.

(Sorry for the dodgy images but I had to photograph them from the pages of a magazine, so they have those little dots all over. C'est la vie.)
Lasqueti Quilt