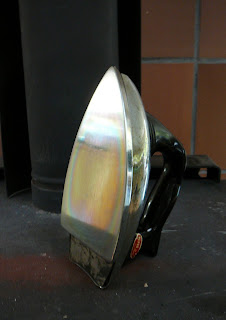 Here on the island there is no electrical grid. People have everything from solar to windmills to waterwheels to gas generators to provide electricity, but whatever the source, most have to drastically scale down their usage.

Being conscientious about the use of power is a always a good thing, but one electrical appliance has been the bone of much contention in our house. I sew, hence I use an iron. And you wouldn't believe how much power the average electric iron draws - usually 1200 - 1400 Whs.

After a particularly unsatisfying episode of trying to construct a Mariner's Compass quilt square without the ability to press the seams, I thought I would have to resort to using old fashioned sad irons. These are big hunks of cast iron with a handle that one heats up on the wood stove - but fairly hard to come by these days. I told someone who grew up on the island about my problem. He said his ex-wife used to use regular old clothes irons with the cord removed.

Aha! I went to the thrift store over in Parksville, and scored a lovely heavy iron that probably dates from the 1960's. Expensive at $5 - it was verging on the collectible side of things. But last night I used it for the first time and it worked like a hot damn. The heavy steel plate absorbed and held the heat from the top of the wood stove. With mist from a spray bottle it flattened seams in a way I haven't experienced since the days of my beautiful old Rowenta.

These days we have the stove going most of the time for heat, so ironing can be done without drawing a scrap of precious battery power. I feel so smug!! (And in the summer I guess I just won't sew - oh wait, there's lots of sun then - solar galore!)
consumerism