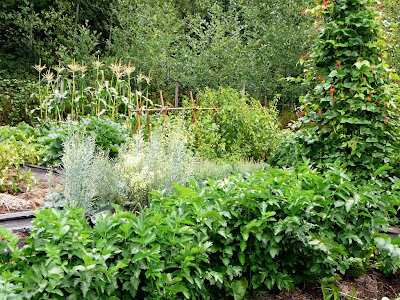 Crop with a Mission: Parsnips. Giant parsnips with the sweetest creamy taste imaginable. Parsnips that converted me into a true believer of the humble root.

Crop That Never Quit: Tomatillos. Grown from seed from the New Mexican town of Truth or Consequences, these sprawling vines grew undaunted through wind, rain , drought and cold nights. Each plant must have yielded 15 pounds of tangy sweet fruit.

Crop That Dropped in and Stayed for the Summer: Roma tomatoes. The six plants that came up volunteer ended up yielding a wheelbarrow full of fruit after a summer of TOTAL neglect. I didn’t water them, weed them, prune them or stake them. They can come back any time.

Crop That Defied Conventional Wisdom: Kutenai Tomatoes. 10 year old seed germinated like it was last summer’s. And went on to produce rich meaty fruits that weighted almost a pound each.

Crop That Failed to Live Up to Its Early Promise: Spinach. Young , tender and succulent, it quickly bolted into tough, sour old age. Maybe next year…

Crop That Laughed in the Face of Death: Broccoli: The seedlings were attacked by cabbage root maggots, but many still managed to hold on and develop strong stems with abundant heads.

Crop That Never Made It Onto the Plate: Sugar Snap Peas. Fat green pods that went straight from the vine to the mouth in seconds flat. Also Winner of the Miss Congeniality Award.

Crop With a Riddle: What is not a crop but has a crop? A chicken, of course! Six Cuckoo Maran chicks came to stay, and although they have yet to lay, have won my heart with their charming ways (and oodles of poop.)

Crop That Made Me Cry: Zucchini. I thought I had picked every last one and when I checked the next day there was a huge two footer lurking under a leaf. Any fantasies I had about having the garden under control vanished at that point and I burst into tears.
Garden