Cream of the West

This time I actually picked it up and had a good look at it. The burlap was a flour sack that had been turned and hemmed on the reverse side - probably someone else had the same idea I had and planned to use it as a base for a hooked rug!

But what really fascinated me was the design printed on the sack. The red and yellow had mostly faded, but the green and blue were still there. I could just make out the words "Cream of the West". An evocative product name if there ever was one!

An idea instantly came to me. I wanted to cross stitch the design right on the burlap, using the printed image as a found pattern. The image was pretty much on grain, and the coarse weave would work up quickly, a nice change from the fiddley satin stitch I have been doing. 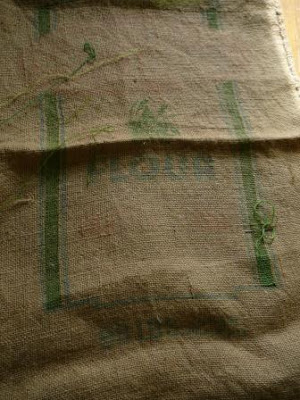 But it won't be easy filling in the faded areas. The photos don't pick up the subtlety of the red, but in the right light I can just make it out. The cloth probably dates from the 1940's. I tried a Google search and found out some interesting things about Cream of the West flour. 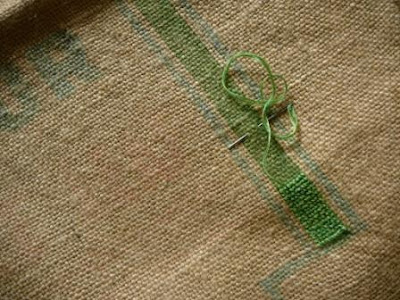 It was made by Maple Leaf Mills, a venerable Canadian flour mill acquired by Robin Hood in the early 90's. The mill's roots go back over a hundred years and its history reflects the oft-heard story of small company bought by a larger company, taken over by an even larger company and finally swallowed by the great whale of a corporation. Cream of the West flour was particularly popular in Newfoundland, and the mill sponsored a number of collections of local history and recipes from that province. 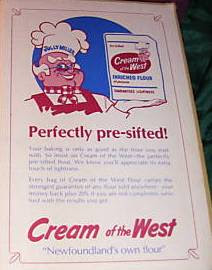 I think it's a history worth taking the time to honour in stitching. I hope as I go the evanescent form of the design will become clear, and my photos will be worth looking at.
embroidery