Cream of the West: Part 2 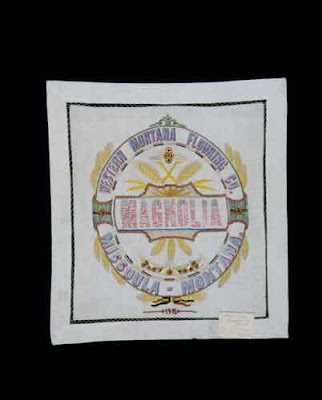 Thanks to all those who commented so positively on my previous post. Although the idea came quite spontaneously to me, it's no surprise that I wasn't the first one to think of this. After doing a bit of research, I was fascinated to learn that there is a large archive of embroidered flour sacks in, of all places, the Herbert Hoover Presidential Library and Museum. The story is a good one. 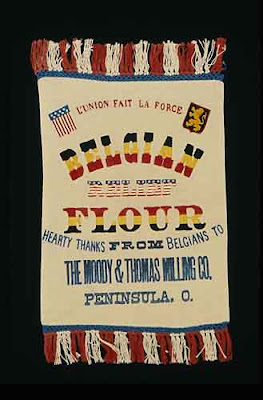 During World War 1, an American volunteer effort co-ordinated by Herbert Hoover sent almost 700 million pounds of flour and other grains to the starving people of Belgium. The empty flour sacks were much sought after, as cloth was scarce, and were carefully distributed to schools, convents and workshops to be made into towels and even clothing. Many sacks were transformed with embroidery and lace and made into hangings or pillow covers to be sold in shops for the relief effort. As well, in thanks to the American people, many of the stamped designs on the sacks were embellished with images of eagles, flags and expressions of gratitude. (Click on the above link for more info and pictures of the collection.) 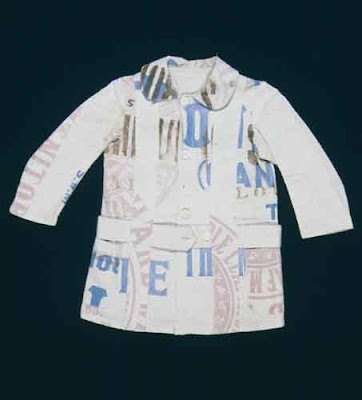 I really like this jacket. Whether it was pieced together out of necessity or a reflection of the Cubist aesthetic of the day, it is still a very cool looking garment. 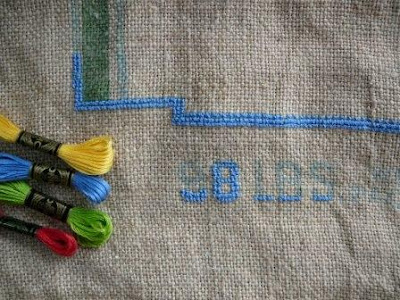 Meanwhile, I am plugging away on my embroidery. The colours of the threads aren't as bright as they appear on my screen, and of course they will be different on yours, but you get the general idea. 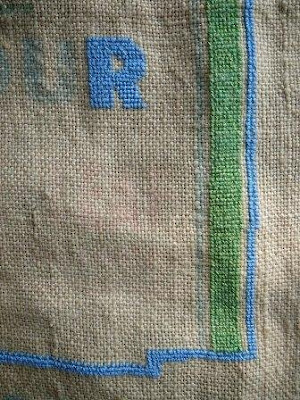 Even though my original intention was to just embroider the design that was already stamped, various choices have presented themselves. Instead of correcting the slight skewiness in the printed image, I have preserved it, and it will give, I hope, a liveliness to the completed cloth.

And, I have been inspired by the work of the Belgian embroiderers of almost a century ago to add something of my own to the design. Don't know quite what it will be yet, but I have a feeling it will include an acknowledgment to the resourcefulness and skill of stitchers past.

While searching I also found this website Art and Flour, a rather eccentric museum devoted to flour sacks. It has a great round-the-world pictoral index of flour sacks - alas, none from Canada.
embroidery