Corky Evans, One of the Good Ones 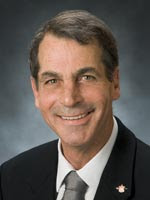 Corky Evans, a "good lefty" representing the Kootenay riding I used to live in, recently gave his retirement speech in the BC Legislature. The whole transcript is well worth reading, particularly towards the end when Corky really gets going, listing his failures in 17 years of politics as well as his continued hope for the future. Corky has always allowed his folksy, down to earth persona to cover for his sharp political skills, and I think this speech shows (once again) what we missed by not electing him leader of the BC NDP.

I agree with what he says about taxes and politicians:
I don't think this Legislature is a sideshow. I know I'm a bit of anachronism in this regard. I know it's been popular in Canada for the last 25 years or so for politicians, even, to denigrate politics and public service and legislatures and legal and regulatory measures intended to limit excess, and even to denigrate the public service.

All of us in this room, on both sides, have been living through a time when we learned to call the employees of the Crown by the pejorative term "bureaucrats" in order to dehumanize them and strip their work of the honour and dignity and pride that used to accompany managing this land and human well-being. It reminds me of when the American people learned to call the Vietnamese people gooks in order to justify making war in their country.

In short, it has become hip to belittle the idea of the Crown and the function of this place to generate discourse or to resolve issues. One minister that we all know has even been known to suggest that politicians have better things to do than to serve the people in public, on the record and in this room. I despise this trend, and I would like to see it end now.

I think there has to be a free press and not a monopoly press. The people who own that press actually have to employ people to report what happens here and to tell the story to whomever wishes to know.

And I think a lot of people, not just British Columbians, can identify with this:
Here's the good news about change. I think it's happening already. Intellectually, you can read the demands for change in the pages of The Economist magazine and even in the speeches of the world's super-elite in Davos, Switzerland, asking for re-regulation to save capitalism by limiting its capacity for excess.

Personally, I feel it happening inside myself. I was driving through Oliver a few weeks ago with a 45-gallon drum of fertilizer in the back of my truck, and I turned on the radio to hear the inauguration of the new President of the United States. Aretha Franklin started singing, and I found that I couldn't drive. I couldn't drive because I couldn't see the road through my tears. When Aretha finished singing, I got back on to the road, and I made it as far as Osoyoos. Then the new President of the United States began to speak.

I hid my face and my pickup truck in an alley behind the laundromat, and I sobbed for 17 minutes. Now, I'm 61 years old, and I'm a guy, and for a little while longer I'm an MLA. And we old MLA guys don't hide in parking lots and sob in our pickup trucks. I kept thinking: "Why is this happening to me?"

The answer I came up with was simply this. We made it. We, my generation, the generation who watched the Berlin Wall come down and celebrated and then watched the whole world lose its collective mind and despaired, had maybe made it to the end of that terrible, shortsighted, speculator-driven, utterly selfish and self-serving pendulum swing.