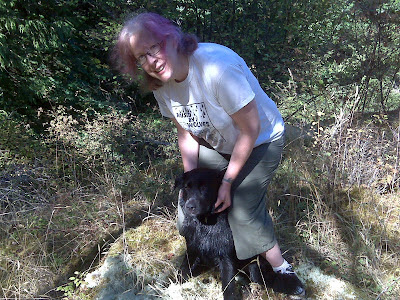 A dramatic rescue at sea happened Sunday night. I wish Funniest Home Videos had been there to record my ignominy.

I had taken Keiko down to the beach for one last walk for the night. The tide was very high, right up to the road almost. Keiko disappeared for a minute, then started yelping excitedly. Seconds later one of the island's feral sheep comes charging out of the trees, with Keiko at her heels, border collie genes firing on all cylinders.

Now, dogs can be shot for chasing sheep, and this was a serious lapse of my pet owner responsibilities. I called Keiko back, I'm sure the whole island could hear me. Of course she had much more fun things to do, chasing the sheep through the trees and into the bay. They both started swimming out into deep water, Keiko, literally at the poor sheep's throat.

I did what they do in movies - kicking off my shoes and pulling off my jacket while diving into the water. I swam out to the animals, pulled Keiko off the sheep and dragged her back into shore, swimming with one arm - finally those Red Cross courses came in handy. The sheep came in on her own - and stood on the beach watching as I had to carry/drag the 65 lb. wet squirming dog up the road.

All the while I had visions of some crazed Lasquetian lunging out of the forest with their .22, ready to take out my dog. Ooooff. What a scene. When I got back to the house and told my family what had happened, they were momentarily horrified, then my Mom said, well, at least you'll get a blog posting out of it!
island life