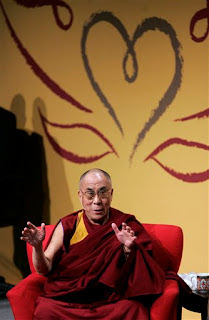 This past weekend I went to Seattle for Swap-O-Rama-Rama at Green Festival - which was quite a kick! Denise is a brilliant organizer and really didn't need me at all, but I was very happy to be there - actually helped people sew, which was something I rarely get to do.

But another aspect emerged from the weekend that I wanted to write about. Coincidentally, the Dalai Lama was also in Seattle for a 5 day Seeds of Compassion event. His presence in the city was quite the topic of conversation. And I got to see an example of how even the briefest moment of proximity to His Holiness affected people.

I had just left the Convention Center and was headed down Pike Street, through the main shopping area, towards the train station. All of a sudden, I heard whistles, and the roar of motorcycles. A swath of motorcycle cops passed by, and the murmur of voices on the street began... "The Dalai Lama!"

Several SUV's loaded with security guys went past first, then two limos with police flanking, then some more police and a fire truck. They passed in a flash, an amazing display of coordination. The street was quiet for a few moments after, the frenzy of shoppers slowed, and smiles began to appear. "Wow, the Dalai Lama!" The atmosphere changed, the very air on the street was different. It was the kind of reaction very few heads of state would receive, I think.
*****
Earlier that weekend, before I caught the bus from Vancouver to Seattle, I had closed up shop at the coffee bar, and was left with half a dozen very nice sandwiches that hadn't sold. I thought that I would just give them to some of the homeless people that hang out in front of the station. How naive I am! I certainly wasn't expecting people to fall all over themselves in the rush to nab one of the sandwiches, but I was a little surprised at the total lack of interest. I finally made it all the way down to the corner of Hastings and Main, probably the most notorious intersection in Canada for the display of human misery and open drug dealing. By that point I figured I probably just looked like too much of a do-goodnik, so I gave my bag of food to a woman sitting on the sidewalk, saying, "Here are some sandwiches, maybe you know someone who would like them."

It was an interesting and humbling experience. Even in my art therapy training I didn't work so directly with people in such harsh situations. It's surprising how hard it is to approach the sort of people one usually avoids, and to see so clearly on their faces the suspicion and absence of trust. Not to say I wouldn't do it again, those were darn good sandwiches and I hate to see anything wasted! But I do appreciate the skill and compassion and faith that our social service workers need to do their work.
activism