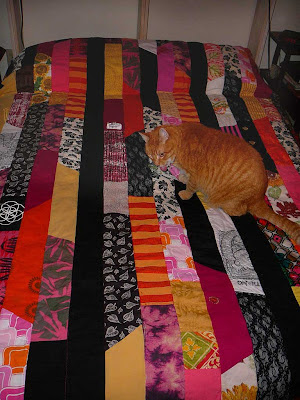 I realize that I haven't posted anything that I've made for a while. Part of that is due to travel, part due to my recent "takeover" of the coffee bar in the studio building I work in, and part due to a giant quilt project I've had on the go. So here's my cat Angus checking out the new quilt, which is made completely from reused materials, including clothing I found on the street during last summer's garbage strike.

The coffee bar has been fueling the creative energy of the building for the last 12 years, serving coffee, sandwiches and snacks. My studio is adjacent to the coffee bar, and while I've been sewing away, I've heard the voices of my fellow artists as they chatted with Sylvia, the proprietor. When Sylvia decided to retire just before Christmas, she offered the business to me, and I happily accepted. It's a small shop, with the usual slow stretches during the day when I can still work on my own stuff. But it also gives me the chance to contribute to the community of 1000 Parker. The painters, furniture makers and sculptors who share the space are interesting folks, and I love to hear of their successes with their work. Two of the artists have turned their studios into galleries, and it will be interesting to see if the building becomes more of a public space, rather than a primarily work space.

And I've been busy behind the scenes at Swap-O-Rama-Rama. Looks like I will be involved in SORR's in Seattle, San Francisco and Austin, as well as producing my fourth one in Vancouver. A busy year ahead!

I'll be off on my trip to Japan on the 20th. I'm feeling that it's crazy to go off on an expensive trip at this point - my mother even advised me to forfeit my non-refundable ticket. But my friend Jacquie, who went on a similar trip last year, says it will be absolutely worth it. Debt be damned, Japan is my dream destination!
quilting