Book Review - The Object of Labour 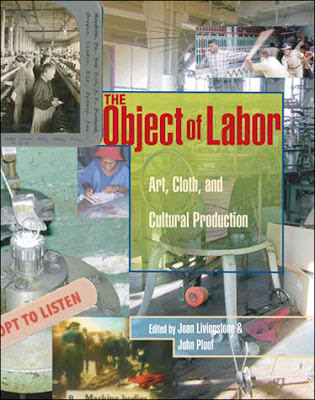 I heard about this book through a somewhat ambivalent review in the (excitingly revamped) American Craft magazine. I ordered "The Object of Labor: Art, Cloth and Cultural Production" anyway since it sounded so intriguing. And what a great book it is! A compilation of essays and art projects from 40 diverse artists, critics, curators and writers, edited by Joan Livingston and John Ploof, this is a substantial chunk of both paper and thought.

Although is is possible to get a bit mired in the academic language of some of the writers, the effort will pay off. The first essay by philosopher Maureen Sherlock was a standout for me, as she wove a seamless discussion of art, craft, sweatshop labour and capitalism. I loved reading an interview with Karen Reimer, on of my favourite artists. I learned about Indian kantha cloth, and an interesting project in Bihar that empowers women to stitch their stories in cloth. There no fluff here - it's a valuable collection and very, very relevant.

If I was still speaking to him, I would recommend this book to a director of an art gallery who asked me to help him curate a show on contemporary BC textile artists. Try as I might, I couldn't dissuade him from his preconceptions. Feeling that the depth of talent and exciting work in our corner of the world wasn't enough, he sought a work from a major American artist to give some weight to the show. And just in case that didn't generate the required relevance, he wanted at least one of the artists to be male. After he dismissed an exciting project right under his nose that created wearable electronic costumes for dance and performance (that later travelled to the Guggenheim) as "just being about clothes", I realised that I couldn't work with the guy. Nice fellow, no clue.

Buddy, if you're reading, check out "The Object of Labor"!
book reviews