The Deed is Done! 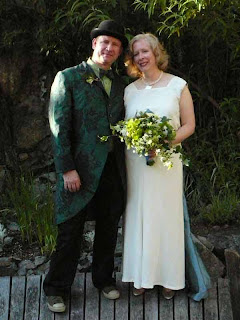 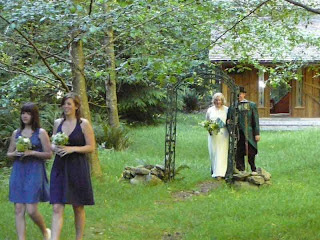 The happy event took place at a retreat centre called Xenia
on Bowen Island. Here we are walking from the Sanctuary, led by Ian's daughters. The weather, which had been rainy all week, blessed us with a break in the clouds. My brother Dave built the walkway to Opa (the tree) several years ago when he was a caretaker at Xenia. 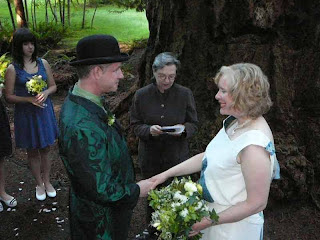 Judy Geddye, a BC Provincial Court judge and textile artist, officiated at the ceremony. 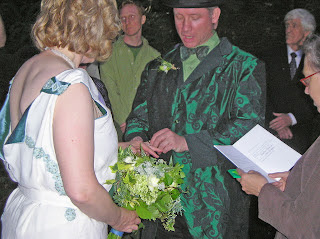 Our rings were made by Sarah Groves of Blue Box Design.
She lives just down the road from us in Vancouver. 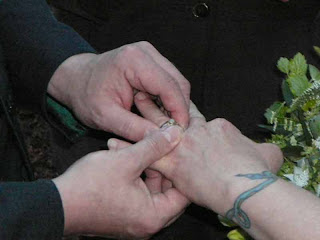 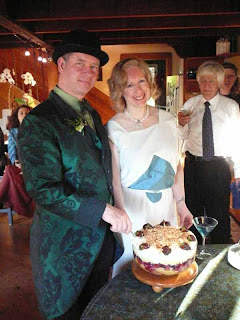 Instead of a cake, my mother made us her famous trifle, topped with chocolate covered local strawberries. We had the reception at my brother's house on Bowen, and were served a fabulous meal of local wild salmon and organic salads. My brother Rob and his partner Jim were bartenders, shaking up delicious martinis. We also had plentiful amounts of organic red wine and sangria. 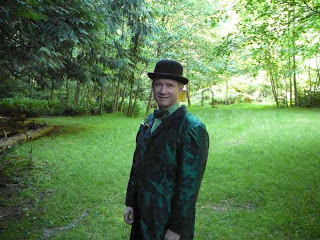 Here is my handsome husband, wearing the frock coat I made for him. It is green silk taffeta appliqued with dark green silk noile. The beautiful, charming and multi-talented Gretchen Elsner made my dress, of ivory silk noile and irridescent blue silk taffeta. 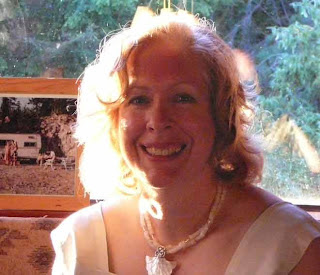 The gorgeous bouquets were created by The Flowerbox, off Commercial Drive, and used locally grown flowers and greenery.
Here's a closeup of Ian's ring, taken while we went exploring on Bowen. 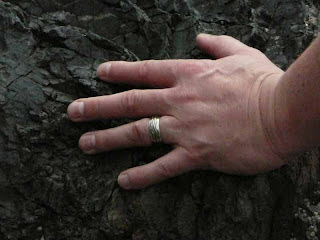 We went for a little kayak trip around the island. 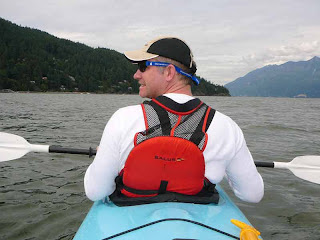 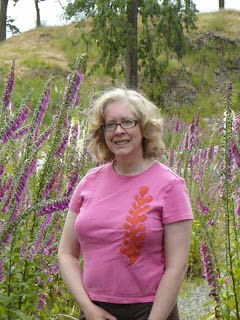 An early resident of Bowen scattered foxglove seeds around the island. They continue to bloom a century later.
1000-year-old trees and 100-year-old foxgloves - I hope that Ian and I share their resilience, adapatability and longevity.