Well, that was a painfully long absence. Not, I'm sure, for any readers I may still have left, but for my lazy, procrastinating, and very sorry self. There are a few mitigating factors, such as working extra shifts, having stomach flu, visiting relatives and such, but I have blogged through worse. I have no excuse. 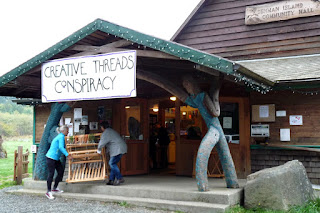 But, thankfully, I do have a few things to share. Last Friday, I attended Barb Mortell's Improv Quilting Class at the Denman Island Creative Threads Conspiracy. What fun! 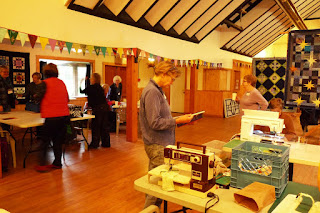 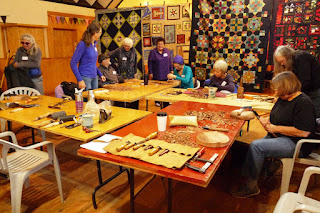 It was held at the Denman Community Hall, a great big space that was divided up beautifully by free-standing quilt hangers. The organizers had hung fabric bunting, too, so the whole place looked welcoming and festive. There were, amazingly, six workshops going on at the same time, and it made for a great feeling of energy. 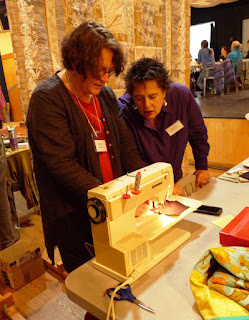 The Round Robin approach (based on Sherri Lynn Wood's concept) to creating our quilt tops was fun, but we were all very tired by the time 3:00 rolled around. Each of the eleven participants had brought a basket of cloth to work with, and began by creating their own first block. Then, the block would be passed to the next person, along with the basket of fabric. We were to engage with the block, and respond to it as we would if it was a conversation, only with fabric instead of words.

This process continued until we had all worked on each other's quilt top. It was quite exciting to see the results. 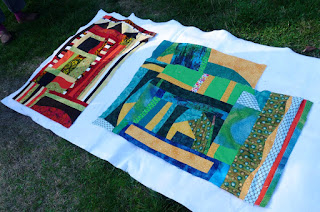 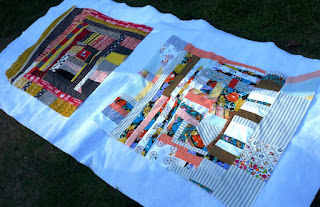 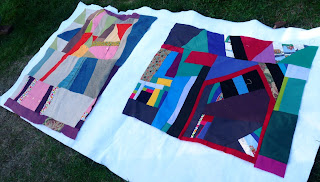 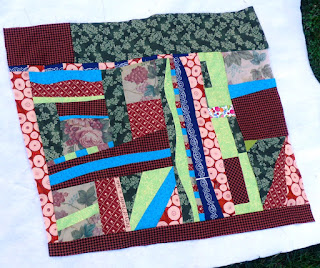 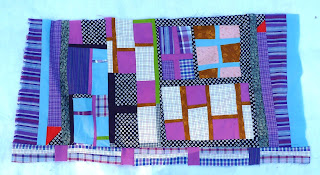 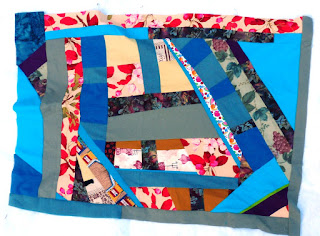 One the way home, it was interesting how I started seeing quilt tops in everything, even the gate to the ferry ramp. 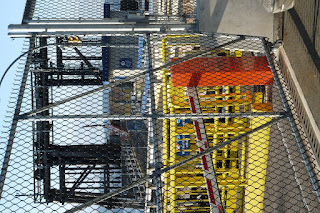 And I haven't forgotten about the Codex Canadensis embroidery. I have half an elk to do and I will be almost finished. Wouldn't you know it though, I ran out of yarn. I have been using Paternayan crewel yarn in one particular colour (shade 460). As I wrote about a while back, Paternayan is now being produced by a new company, with the same master dyer, and I didn't anticipate any significant difference. But the new batch arrived and I hate to say it - there is a noticeable difference. The yarn is almost half the thickness of the old stock. It may be due to the kind of fleece they are using - a bit softer, finer - but combine that with a different dye lot and whoa! The yarn is still very nice, and totally usable for other projects, but I can't have half an elk looking kind of weird. 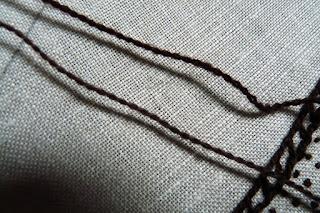 Of course, it's the kind of difference I am very sensitive to since I have gone through at least 40 skeins since starting. My fingers told me there was something off before my eyes did. It could be that nobody else would notice. But I am the captain of this particular ship and IT MUST BE DONE RIGHT. So now I am using a mixture of old stock shade 470 (slightly redder than 460) and one, sometimes two strands of the new stock 460 in an attempt to get the same overall colour and texture. Urrghh.
codex canadensis embroidery island life quilting re-use